I found out about two weeks after I placed my order that McMaster's custom chain length item is meant for link numbers divisible by two. Awww shucks, I couldnt trick the system. I calculated previously a length of 51 links for a perfect chain length so they called me up one morning and handed me the unfortunate news. I would have been bummed, except I had already gotten tired of waiting and decided to beat it anyway with some surplus chain given to me by Aaron Fan.

The sprocket was the tricky part. Because I'm cheap, I neglected to buy any appropriately thick metal to cut #25 sprockets out on the waterjet. So I ended up with a 3/16" thick plate of mystery steel from the scrap pile. Most sprockets of #25 are some 3/32" thick with an edge taper. This piece of metal would require a good amount of working with some care for symmetry. My first thoughts were to add the bevels on the lathe, but we didnt have tooling shallow enough not did I want to disrupt the squareness of the toolpost. This is what I ended up doing. 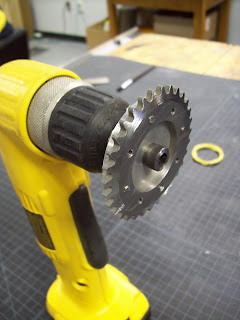 Ah yes, I feel like a high school student again. That is a right-angle drill chucking a cap screw, which is holding a plate of aluminum that has the sprocket bolted to it. The assembly spins against a belt sander and adds a bevel (slowly). 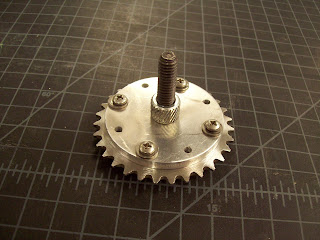 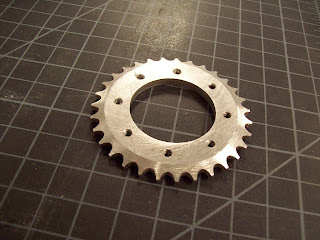 Now excuse me as I tempt fate with my 30mph nonsense on wheels.
Posted by Jamison Go at 1:16 AM