Overhaul is a 250 lb Battlebot as appeared on ABC Battlebots during Summer 2015. It's main weapon is the pinching beak which can exert several thousand pounds of force. However, Overhaul can also lift the entire assembly in order to flip or isolate opponents traction with the floor. The outriggers are designed to fight horizontal spinners but also provide wedge surfaces to combat wedge robots. Overhaul's drive has two configurations; the original drive system uses shuffling legs to provide forward motion. However these were swapped with a wheeled drive train at the beginning of the season to give a more competitive edge. These tools were essential in its matches against Lockjaw. Overhaul was eliminated from the competition in the quarter finals against Bite Force in a close wrestling match which literally had the judges "on their feet". Look to see what is new on Overhaul in season 2!

Introductions
"If they were a rap group, they would be called NWA - nerds with attitude! Coming straight outta Cambridge, here's Overhaul!"

"From MIT, its a Master's in the three R's: reading, writing, and wrecking your life! Give it up for Overhaul!"

"Built by MIT engineers so you know its stupid strong! Prepare to be dumbfounded, its Overhaul!" 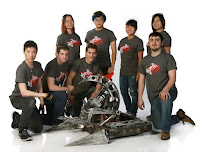