DDT: (Onyx) One filament to rule them all!

DDT, my antweight (1 pound) combat robot, has seen much success and acclaim due in part to its adoption of the Markforged composite FFF technology. It has lead the curve in additive manufactured combat robots and at the time of this article holds the #2 ranking for its weight class, worldwide. Markforged has done a few articles about DDT and you may have seen a DDT replica as a display item at trade shows across the US.

As wondrous as composite 3D printing is, materials cannot compensate for design or fatigue. DDT suffered from some belt/pulley issues at Franklin Institute 2016 so I elected to update the weapon drive to 1/4 inverted MXL belts just like Silent Spring's weapon drive. This of course meant I had to rebuild the frame to accommodate for the thicker weapon pulleys. I swapped to Maxon 13mm gearheads while I was at it; this would save me space and weight for the heavier transmission system.

That DDT frame was also a bit behind my 3D printed iteration curve. It still featured fiber in every layer and Silent Spring proved this was not necessary. But hey, why not take one step further? Fibers significantly improved the stiffness of frames made of nylon but the release of the new Onyx material, nylon with a percentage of chopped carbon fibers, proved that stiffness and strength could be achieved with that material alone. I decided as a challenge that the latest version of DDT would use Onyx material only. If this is successful, builders can create awesome parts for significantly less cost! What I am referring to is the new Onyx One series of printers that were released just a few months ago. They are limited in material capability compared to the Mark Two but you have access to Onyx prints for $3-4k which is approximately $10k less than the Mark Two. That is something hobbyists can more readily afford!

As a test for the material, I elected to change as little of the design as I could. That should hopefully draw a direct comparison between the materials since the design elements stayed the same. An obvious variable is that DDT may not fight the same opponents at the MASS Destruction combat event, but we will have to assume that the forces the robot experiences will be similar between opponents. For the curious, that's a 50% infill. If you go fully dense in a large part you aren't fully utilizing the power of additive manufacturing! 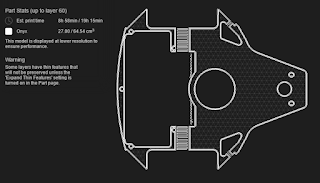 With the continued software updates, the Markforged printers continue to impress. The support structures easily peel away and leave me with a usable part from the printer in less than 5 minutes. I had to bore out the motor mounting holes because the support structure droops at the top of the circle but I could have easily compensated for that by designing it as a teardrop shape. Remember, Onyx material can print at ~30 degrees from the horizontal without needing support!

The electronics transplant was quick, even with the motor swap. It looks like when the disk cracked, part of it flexed and actually hit the pulley which caused the delamination. a portion of that energy actually bent the stator mount in my Hacker A20L! No wonder the belt distances were too close!

The blade mount was updated for the double washer load distribution assembly which I found absolutely necessary to keep everything stiff in plastic insect robots. To summarize, the large face aluminum parts increase the amount of area subjected to forces and is less likely to plastically deform after frequent shock loads. Small but precision spacers keep the inner races in compression while the outer races can float axially; this keeps things from being over constrained which allows longer bearing life and higher efficiency. 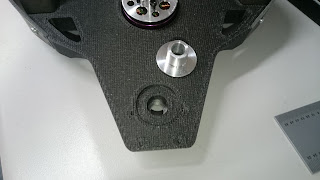 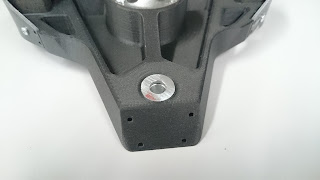 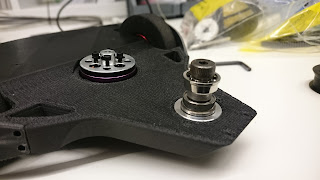 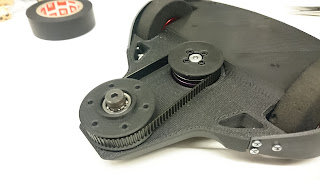 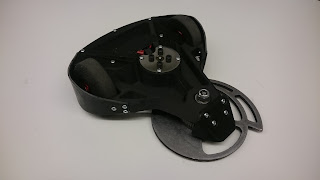 The wheel guards are 1/16" nylon machined on the waterjet cutter. They were brushed with scotch brite in the long direction to match the layer striations and matte finish of the Onyx material.


The last part to make was the blade. I still had the 'bash blade' from old versions of DDT but I needed a new standard blade for use against most robots. I managed to cut one last blade from the 3/32" O1 plate that I had but this time decided to temper the blades. At first quench I achieved full hardness at 65 RC but them tempered the blades down to 54. This should give me more toughness but plenty of hardness. 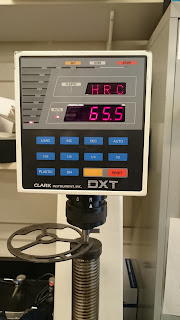 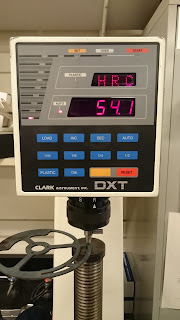 The completed robot weighed in at 15.5 oz which is lighter than previous versions of DDT. So naturally, I spent some time in decorating the robot with vinyl stickers. 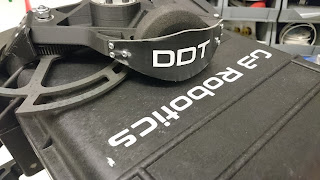 I took this new version to our local competition, MASS Destruction, which was hosted by the Charles River Museum of Industry and Innovation and ironically sponsored by Markforged. There was a great turnout and many fearsome robots including the defending champion "Foiled", a undercutter robot which featured a turbine-spoke disk to give it additional down force; this robot was printed on a Mark Two printer.

Long story short, the pure-Onyx frame worked wonderfully! The robot took and delivered hits without any unreasonable failures in the frame. As expected, when the frame is hit, it will take damage in that location but that is expected of any material. If anything, the overall damage was minimized because the hollow structure simply crushed in a localized area. If there were continuous fibers, the damage may have propagated to nearby sections of the chassis.

DDT went undefeated through the day until it suffered a heartbreaking electrical problem in the last moments of the 'winner takes all' finals. That landed DDT with a 4-1 record and 2nd place. Who won 1st? None other than "Foiled" so really we can't be disappointed here. However, in my opinion, the real winner are the Onyx One printers because we've just shown that Onyx alone can hang in with the best of insect-class combat robots!

W vs Foiled
Right off the bat, I get the fight the champ. Foiled has more MOI than DDT's blade and its made from a tougher material (AR500 vs O1 tool steel). His wide stance and airfoil would likely mean he would look better if we exchanged impacts so my first thought would be to attack the wheels. That sounded like a great strategy but if I missed he would likely take my wheels! With the faster and more nimble drive, I decided that I would slowly edge his blade with mine at full speed and try to machine his blade down. What ended up happening is that my blade slid under his and started clipping his bolts! That caused him to go unbalanced and vibrate. Then I decided to be more decisive and attack his wheels to some success but at the same time taking some damage (as shown above). The match went full distance and the judges awarded DDT the victory.

W vs Micro Mystery
These girls were newcomers but it looked like they had experience with combat robotics before. The robot was no slouch; it had a very long undercutting bar which by eye could over reach DDT. I hoped we might be the same blade height otherwise it would end poorly for me (Silent Spring v Circuit Breaker @ Bot Blast 2016). But when they loaded in, Fred flipped over their robot. I think they had delayed which subjected them to the 'wheel of misfortune' in which one of the punishments is starting inverted. Fortunately for me, DDT's sleek profile was able to sneak under their overhead blade and hit the chassis before their blade could hit mine. After a few hits, the battery became exposed and by event policy, their robot would lose by KO.

W vs Eclair and Bonbon
Ian finally upgraded from the toy transmitter and so he had full control of his bot. When he has full control, hes quite dangerous; his beetleweight "Quicksand" is evidence to his tenacity and driving skill. My strategy in this match was to maneuver around long enough to get to speed and deliver light, jousting hits. After removing some cosmetic pieces, I tried the 'spin slice' maneuver to hit higher up on the bot. One hit flipped him over and disabled his power. Tap out victory for DDT.

W vs Eclair and Bonbon
I aimed for the same strategy as the match before but this time we saw a more exciting result. DDT caught a lucky grab on part of Ian's bot and an explosion of parts signaled a KO victory.

L vs Foiled
Now in the finals, we find a familiar opponent! Foiled reversed his screws fastening the blade such that the button heads were facing down in an attempt to try and keep them from shearing off. But looking at our blade marks from last match I knew there was still a good chance of the same thing happening. My updated strategy was to disrupt his drive by forcing the blade to go unstable; I was able to slowly pull it off and started going for the wheels. As Foiled was no longer able to be the aggressor and took more damage, I thought I had the match won. However, one last tap dislodged a main power connector that was damaged in a previous competition and DDT shut down. Alex was a great sport and tried to revive DDT but to no avail; DDT was counted out in the final seconds of the match!