Last post you saw a glimpse of the tragic history of my first and only Hobbyweight (12) combat robot. At the end, I declared I would try my hardest to take the title this year and have implemented extensive upgrades to make it happen. It goes without saying that I did a complete teardown of the robot and its systems but here are the main points to remember moving forward.

Last year the drum from 2008 finally gave up. Usually this is the point where builders will reevaluate their design and decide to build an entirely new bot all together. However seeing as how the chassis was nearly undamaged, there wasnt a point in rebuilding that so we will just build the drum again but better. 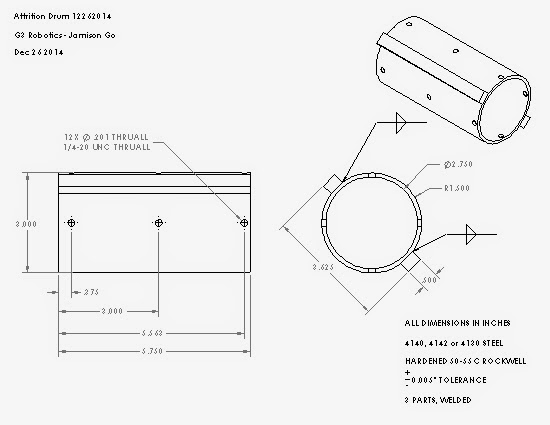 For this, I had the drums sent to a professional machine shop. Team Whyachi has been providing fabrication services for years and resulted in years of super happy customers. You can find their page hyperlinked numerous times above. I sent them some relatively simple drawings  and Clint Ewert immediately went to work. I started conversing with him maybe Dec 31 2014 and I had the drums back to me 1-2 week of January. Talk about quick turnaround! 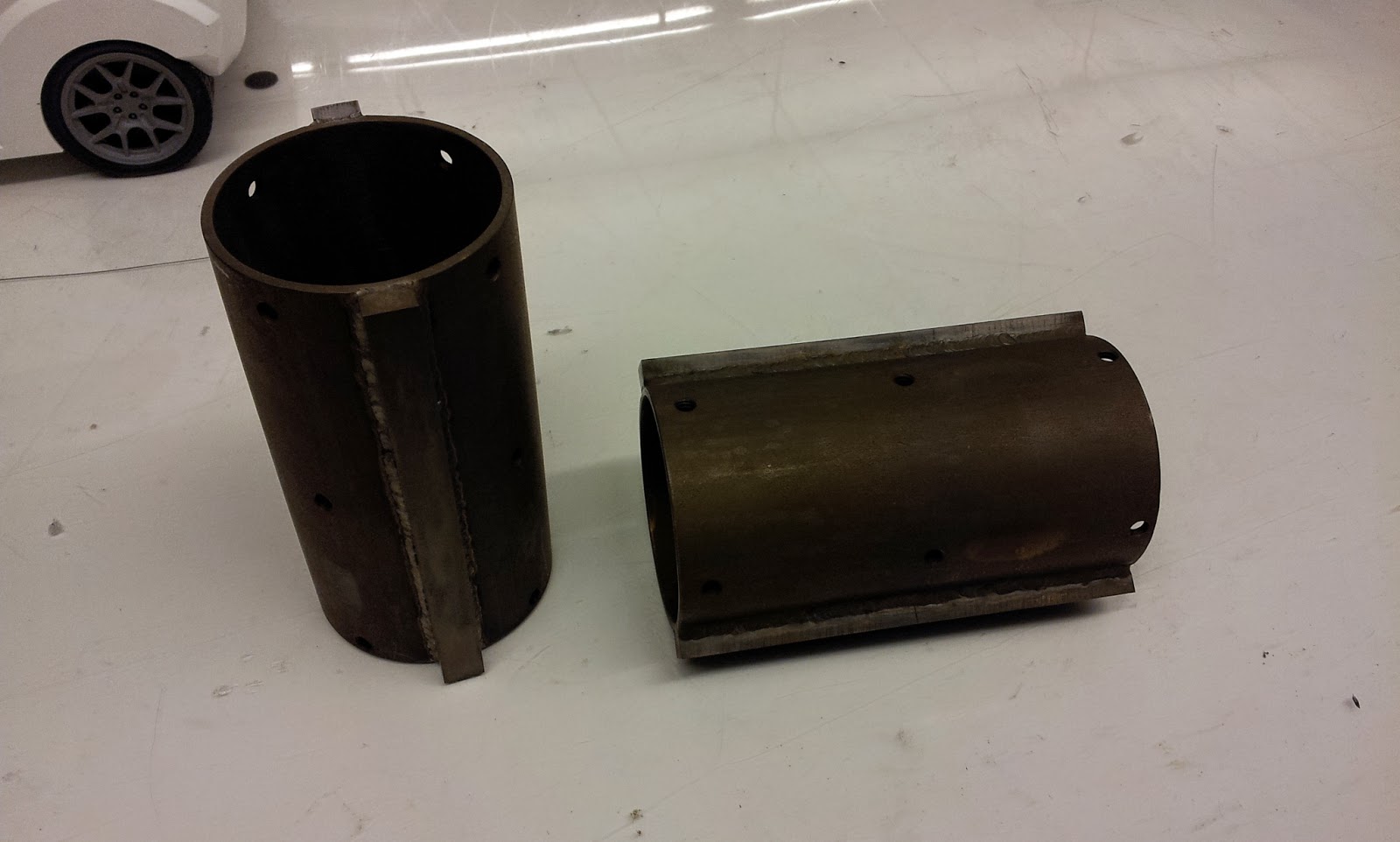 The drum is still the same dimensions as the previous one (3" OD, 2.75" ID, 3.625" T-to-T) but the materials are now compatible. 4130 steel all around, hardened afterwards. I asked for 50-55 C Rockwell but some metals treatment literature say 4130 can only be hardened up to 45 C. I'll take the spare to the Rockwell tester to see how it actually came out.

BTW, I bought 2! Two drums for a total of $650 including shipping. Whyachi paid for materials, did machining and services, and a batch of heat treating which makes this a phenomenal deal! Plus, all dimensions are within 0.005" tolerance specification which is ABSURDLY GOOD for welding and HT. Would recommend again!

The bigger issue now is the fact that there was some internal damage to the motor components. While the Whyachi drums were on the way, I cracked open the drum to harvest the relevant components. 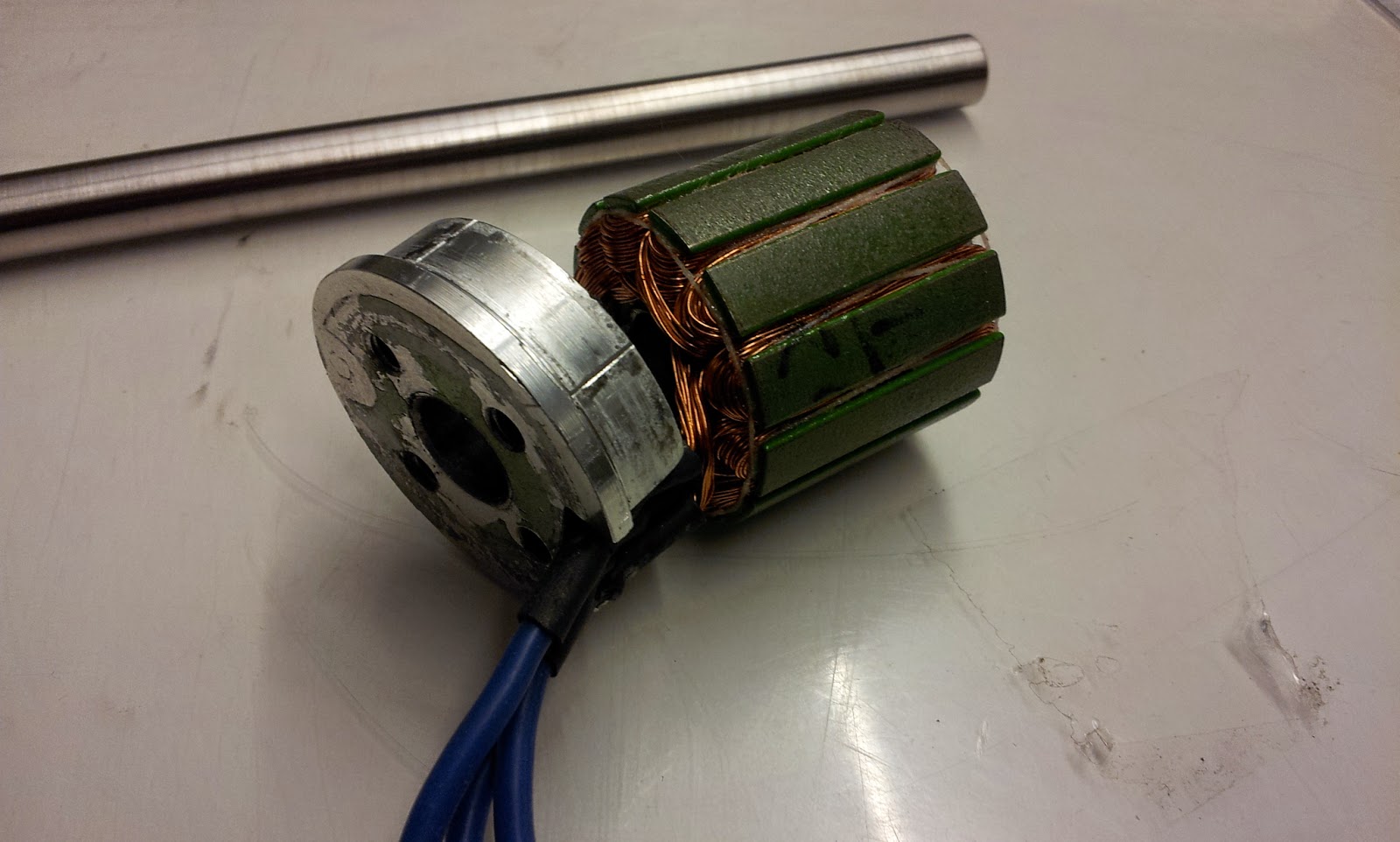 Oops. Isnt that supposed to be attached? This was the worst problem among the shattered bearings and dented races because that motor isnt cheap by far. I evaluated at this point if I should purchase a Turnigy equivalent to replace it.

What I ended up doing was JB welding the motor to the shaft. While this make it an incredibly permanent solution, I recognize that the state is fully encapsulated by the can and drum; It should be simple enough to salvage if things go completely bad. I think I am fortunate that none of my motor wires sheared. This gluing process was done with the guts in the frame. Because the center races are all in compression, it locates all the components securely. 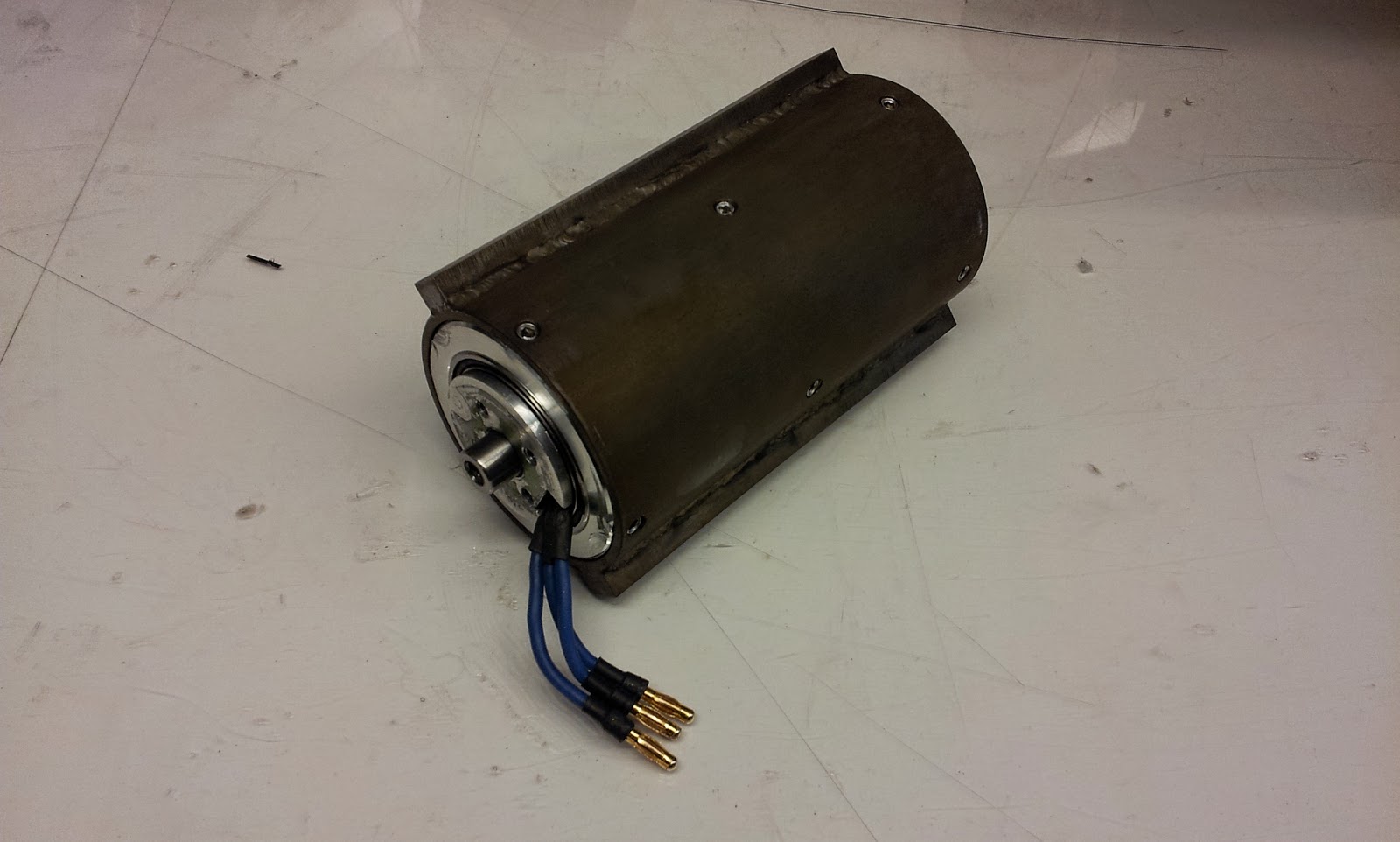 I decided not to paint this drum. Partially because I was impatient but also because spraypaint would have fouled my tolerances inside the drum. I may consider painting the spare if the first drum gets damaged.

The majority of work was actually put into redoing the drive train. As mentioned previously, I lost a good majority of matches due to drive faults. The first modification to take place was the center double pulley. Last year the FDM pulley had far too much torque at the shaft and displaced the set screws threaded into the pulley. 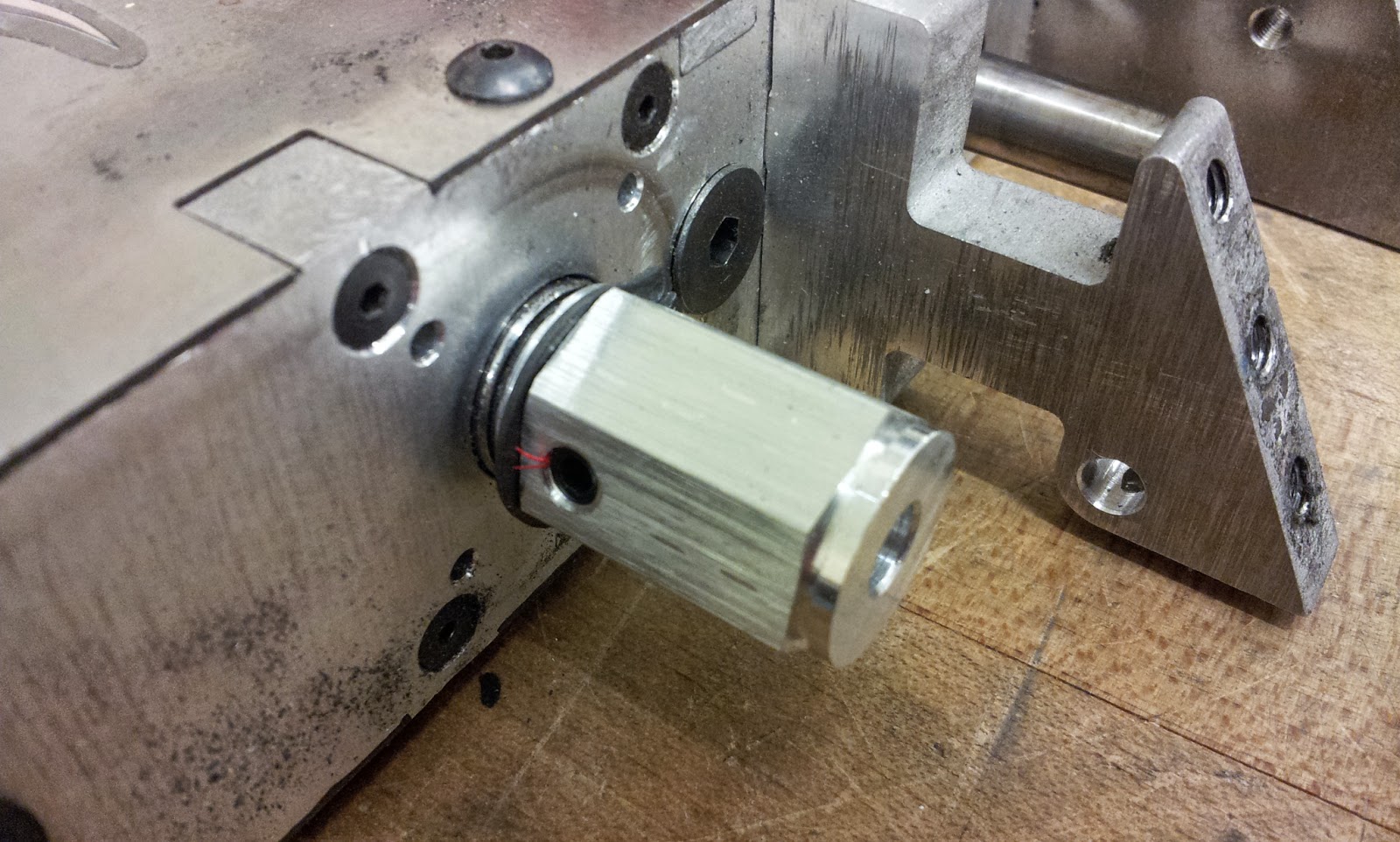 This year, I borrowed some design concepts from Charles Guan. I started with some 5/8" aluminum hex and turned those into intermediate shafts. The hex would go over the nominal gearmotor shaft providing me a meaty aluminum interface for set screws and the like as well as a hex cross section for torque transfer. Snap rings on either end would prevent the pulley from sliding off the ends. 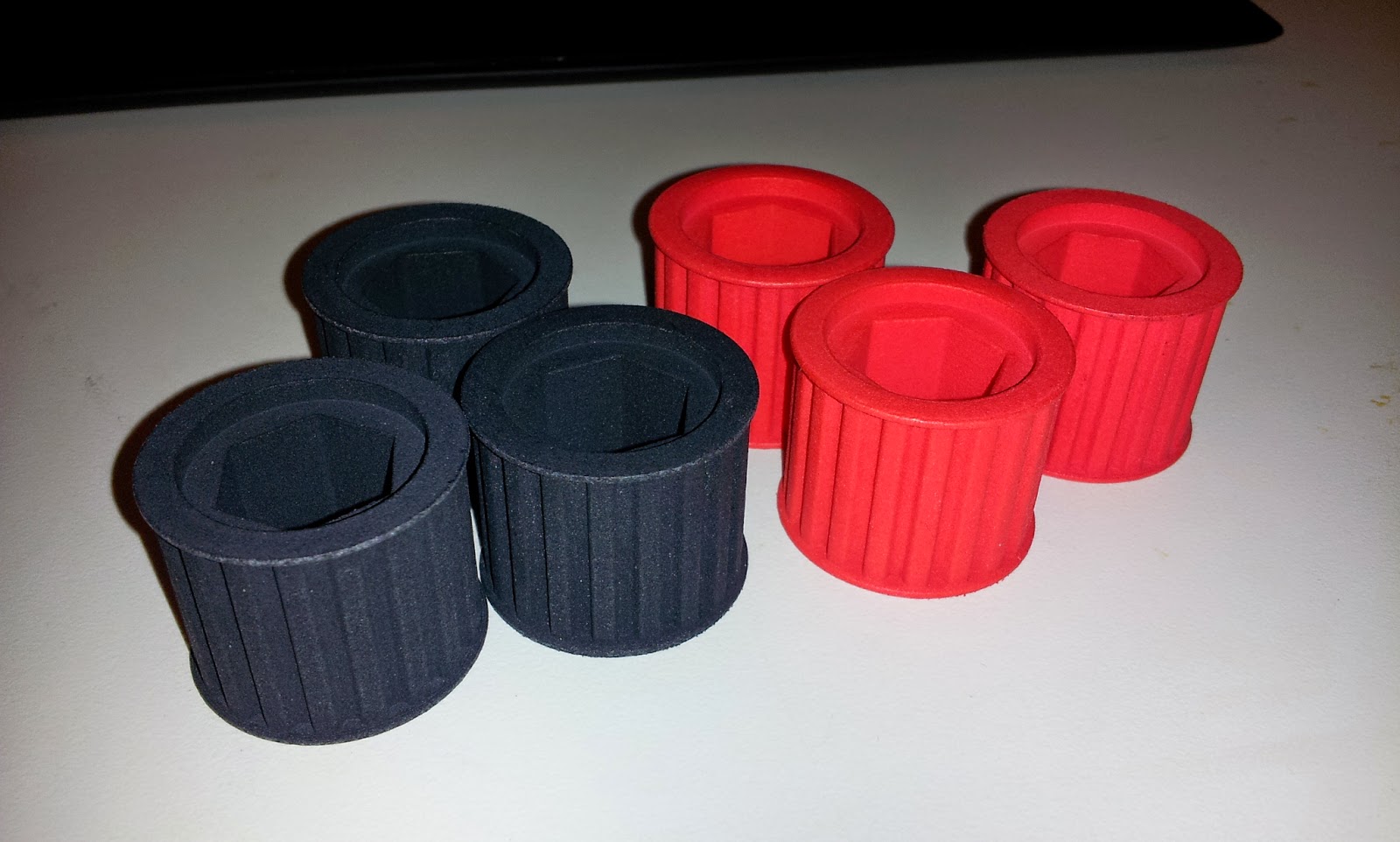 The pulleys themselves were selective laser sintered (SLS) nylon from Shapeways. They were my usual 20T XL pulleys but designed to go over the hex. I got them in black and red; the red set being the test set. I wasnt too certain about the durability of SLS parts so I got the red set to test part durability. If at any time during a test I saw red  powders on the bot I would determine they pulleys not combat grade. Black would have been much harder to spot. 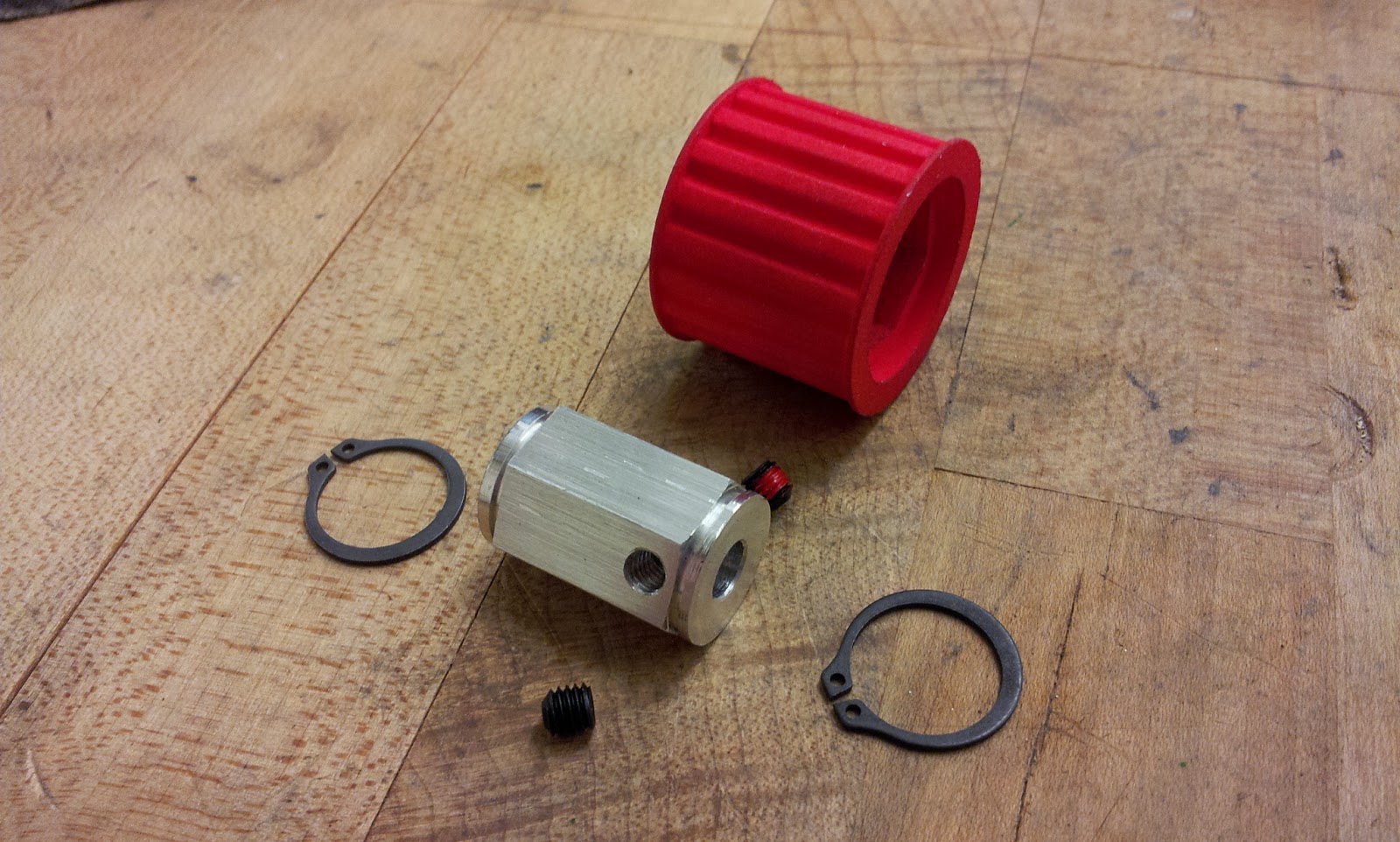 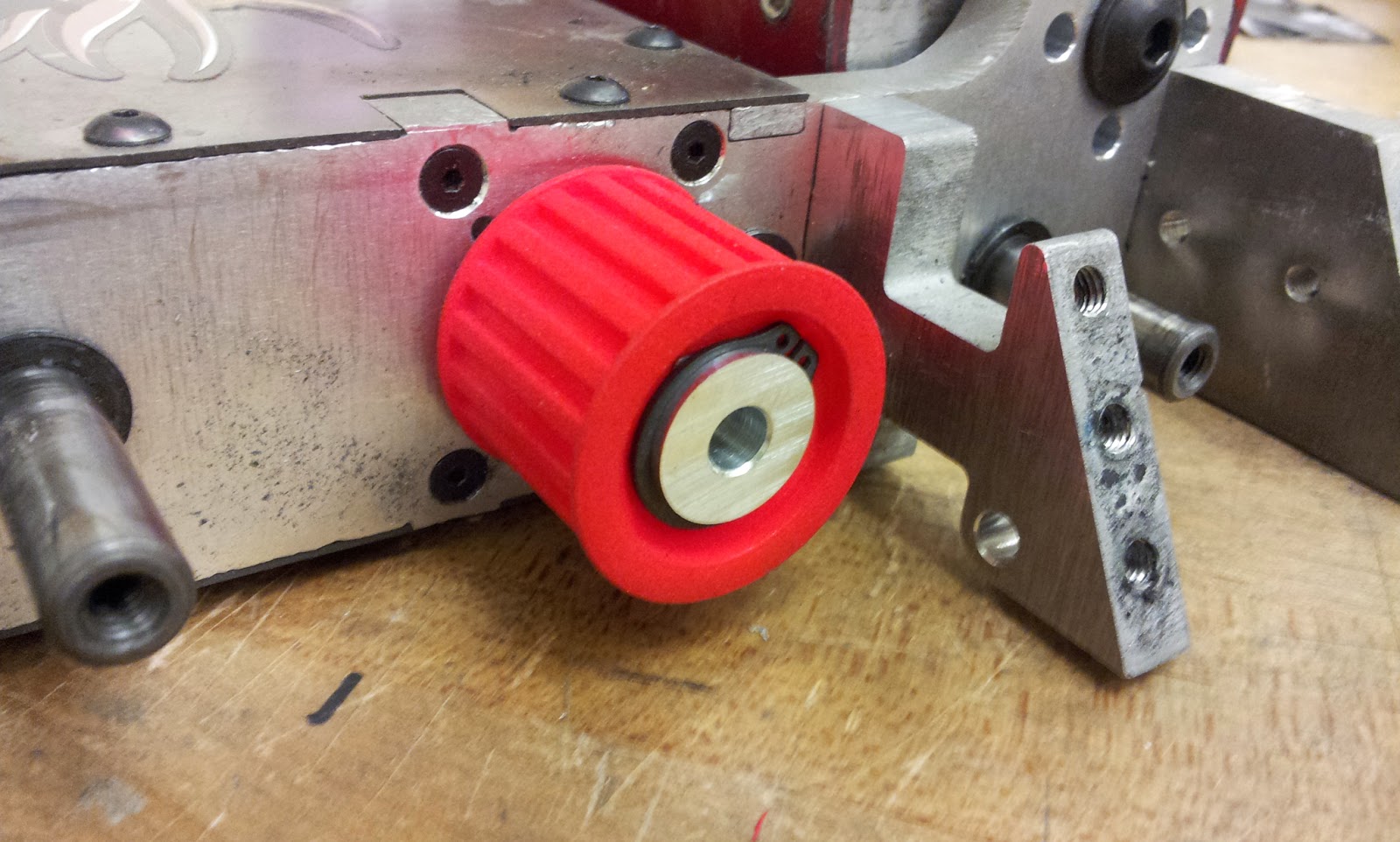 Pretty neat eh? Initial test drives with the old motors were promising. No red flakes to be seen, nor belt slipping or tooth shearing. We'll run it later in the week with the weapon for some harder durability tests. 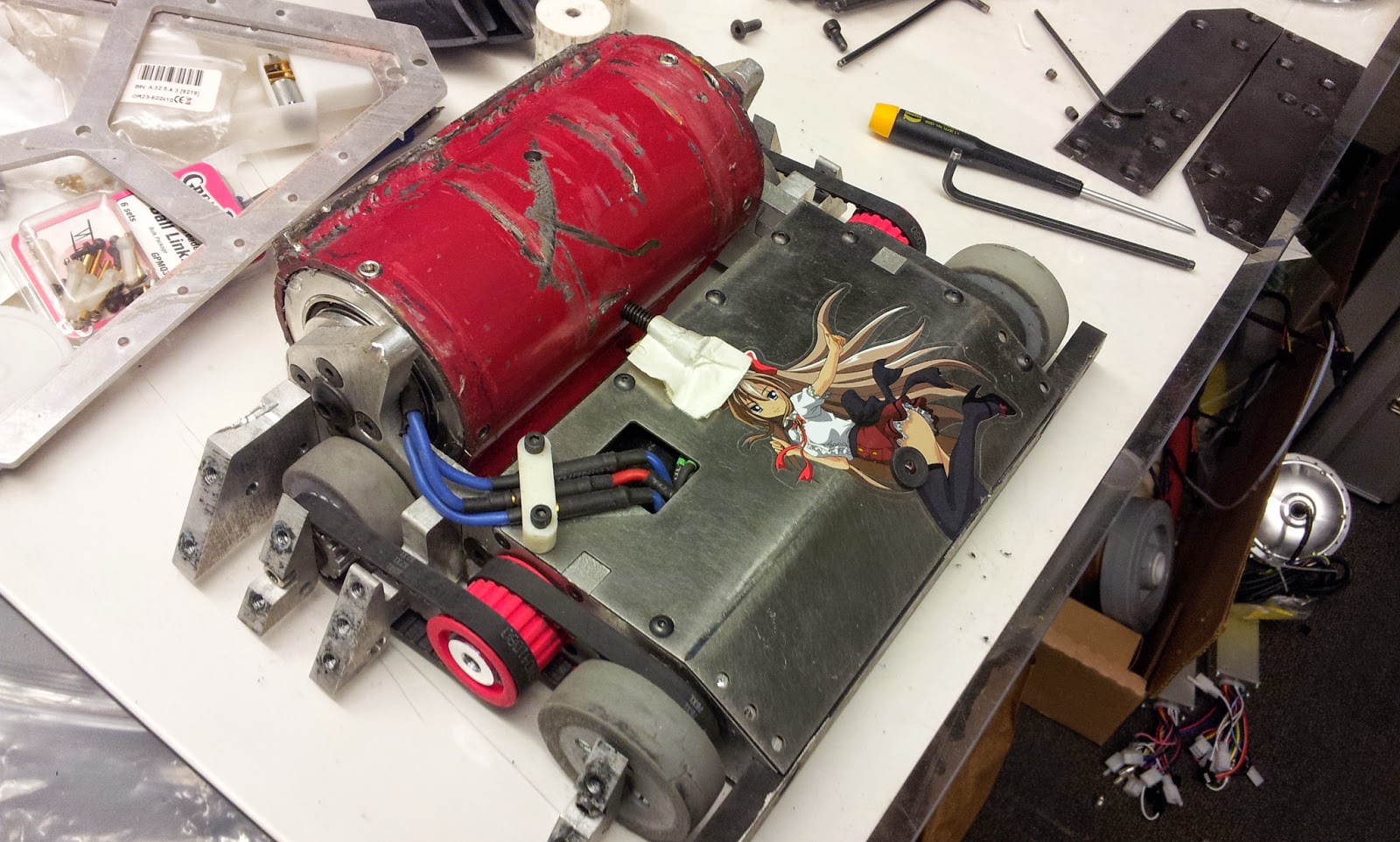 Next was the motor. Currently, I use "long can 400" motors or "480 sized" motors. I used to use Banebots 395 motors but they were too slow. See the difference between last year and the year prior. That shows nearly 4 mph of difference in speed! There are a number of 480 sized motors on the market but they are usually used for direct drive prop airplanes which means they are typically low voltage, hot wound, and timed. The trick for me would be to find something mid voltage, mild wind, and neutral timed. This search proved to be near impossible. 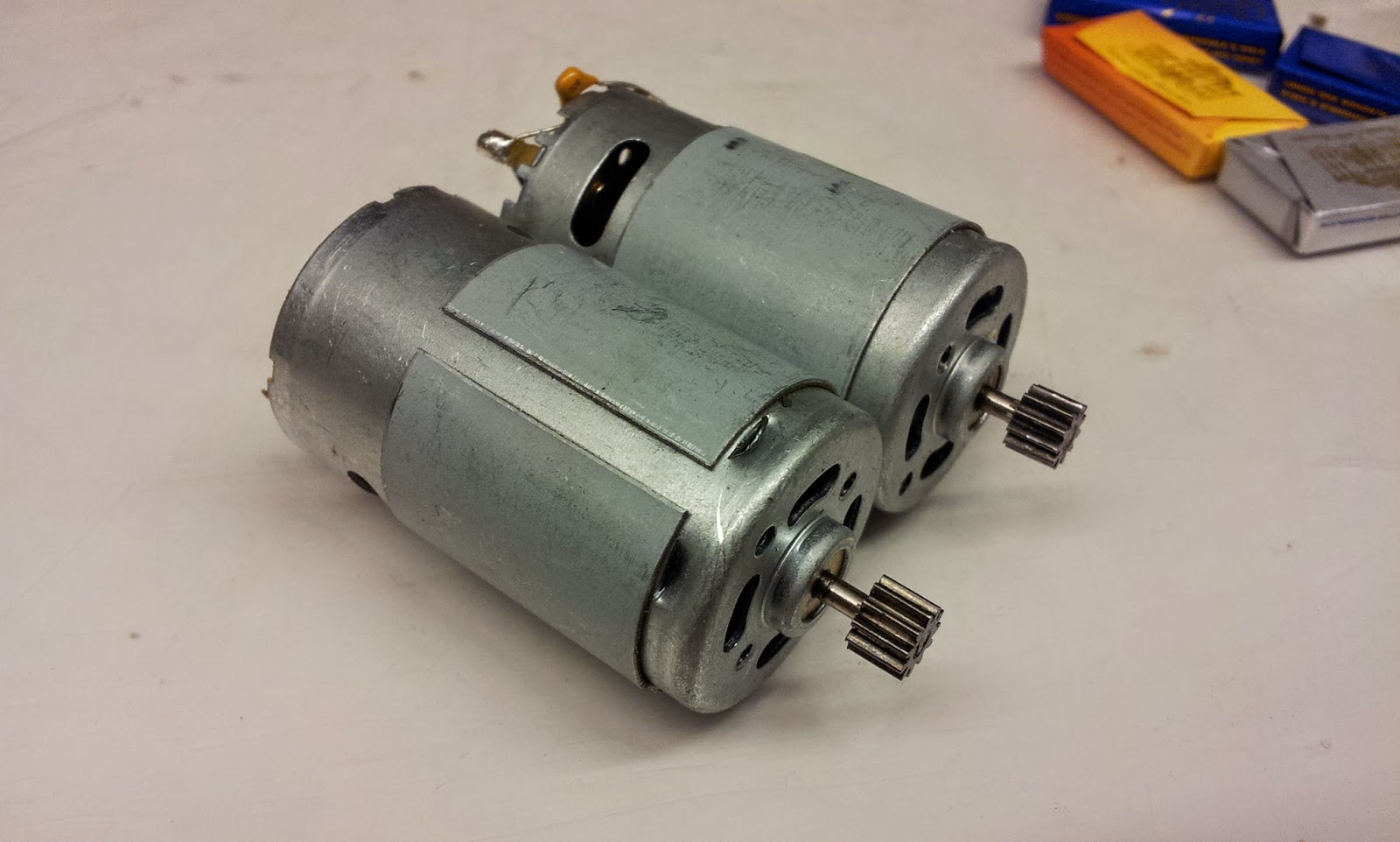 I ended up getting four of these 480 motors from RC parkflyers. But testing proved that they were actually 6V native motors and I quickly burned one out. Ugh.

A second option was to modify the mechanics of the gear reduction. The gearboxes are largely custom inside Attrition so this would not be easy. Essentially I needed a way to replace the existing stages with low reduction stages only. Some searching on Alibaba for 32mm planetary gearmotors turned up some interesting concepts. I found my 19:1 gearmotor model but the vendor actually sold a 14:1 and even a 11:1! What did this mean? This meant other stage combinations existed and this modification was in fact possible. 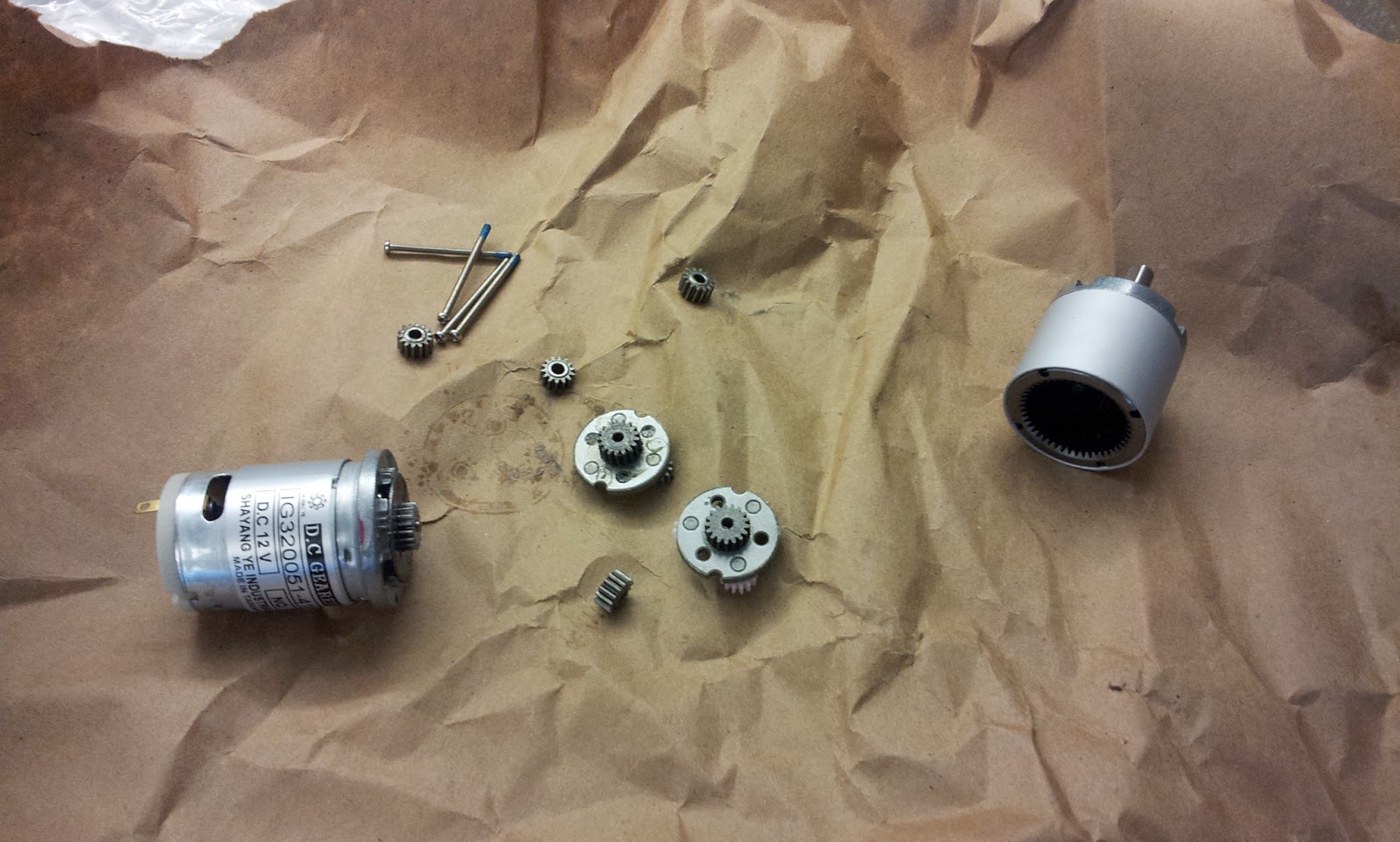 I did my research on gearmotors. Servo City sells 32mm gearmotors as well but their spec sheets are incomplete. Super Droid Robot Land provided the manufacturer's specification sheet which clearly indicated either 11T ot 17T sun gears. BINGO! That means there are only two types of reductions and they are either 3.7:1 or 5.2:1 as previously mentioned.

Then I combed through their standard reductions and factored their values by the two stage types. From this I can accurately tell what stages and how many will be inside each gearbox. I bought a 51:1, which is composed of three 3.7:1 stages.

Looks like the first stage is plastic. Not a problem since the other two were metal. Now I could use the slower but mild wind Banebots 395 motors to give me about 8.3 mph. It isnt as fast as last year but should accelerate faster. Plus, I can actually buy spares! While I was at it, I decided to replace the worn components in the gear motors. New shafts, new bearings, new steel shims!

Now this isnt a primary point of failure, but while I was putting my all into retrofitting the robot I might as well address this as well. Typically, I would run with or without wedgelets which were little slivers of titanium held on with stacks of UHMW shims that acted as spring loaded hinges. It was a neat idea for awhile but the ultimate lack of durability in the UHMW was a failure point in that they were easily sheared off.

After fighting designs like Thomas Kenny's "Shame Spiral" and Pete Smith's "Isotelus Rex", I realized there is a clear winning design to fight the "Solaris" drum bot design and that magical snout was the trick. To counter battle, I would play the arms race against their ramming plows. 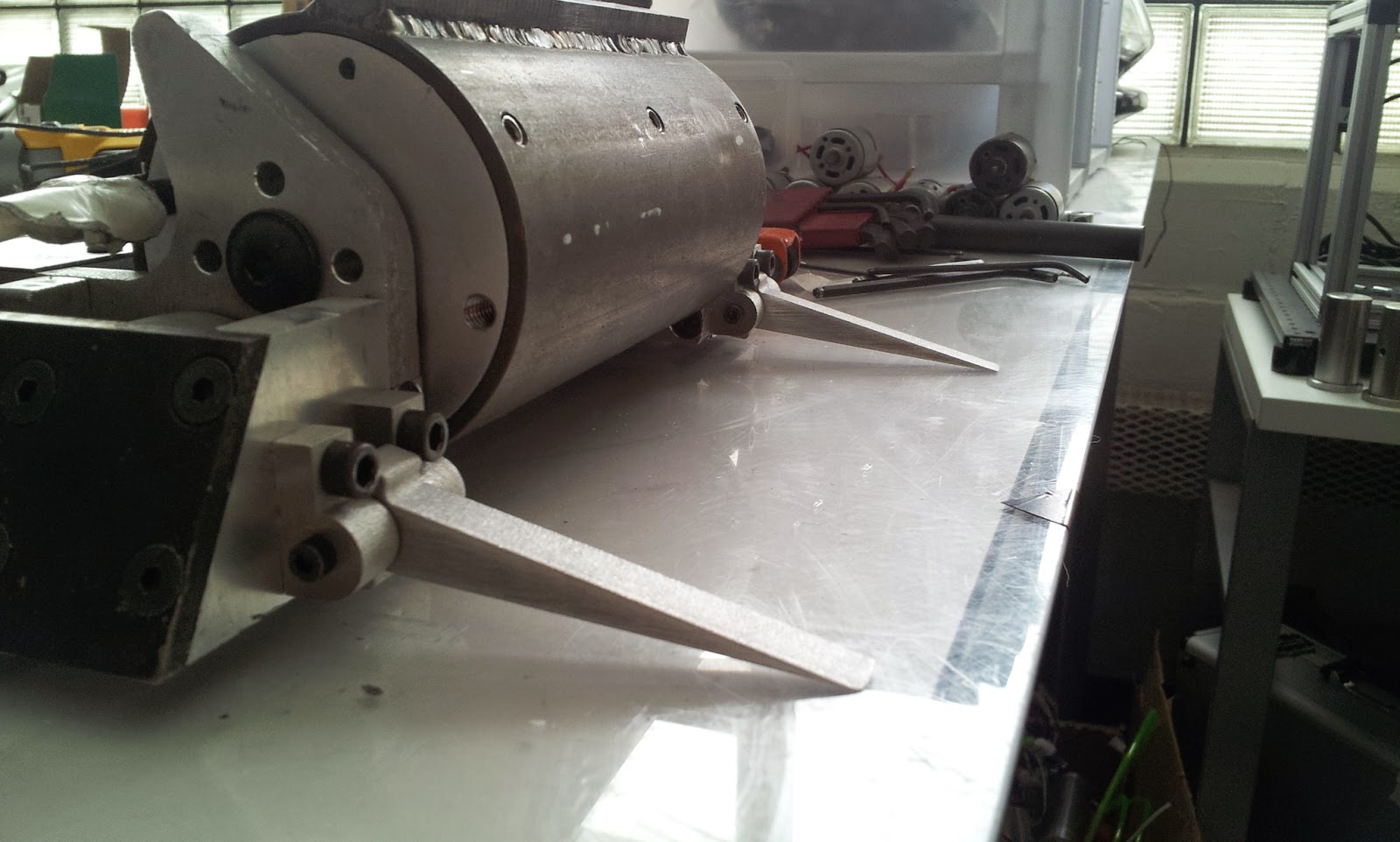 I had these modeled in previous models but never took the time to make them. Now that I had "MegatRON" parts being made from Big Blue Saw, I decided to throw on some small parts for Attrition. Now I have a number of wedgelets in various lengths to handle general purpose wedges and specialty designs.

The one type of spinner Attrition has somehow managed to avoid are massive horizontal bars. For these designs, I have some additional defenses in the works, but no need to reveal them yet ;)

Loads and loads of spare parts

This time, I will not lose from lack of preparedness! I am bringing all this and more in case I have failures. These are the expected points of failure so it is possible other things can happen. However, should any of those parts take damage, the bot probably deserves to be retired. Lets hope I predicted correctly! 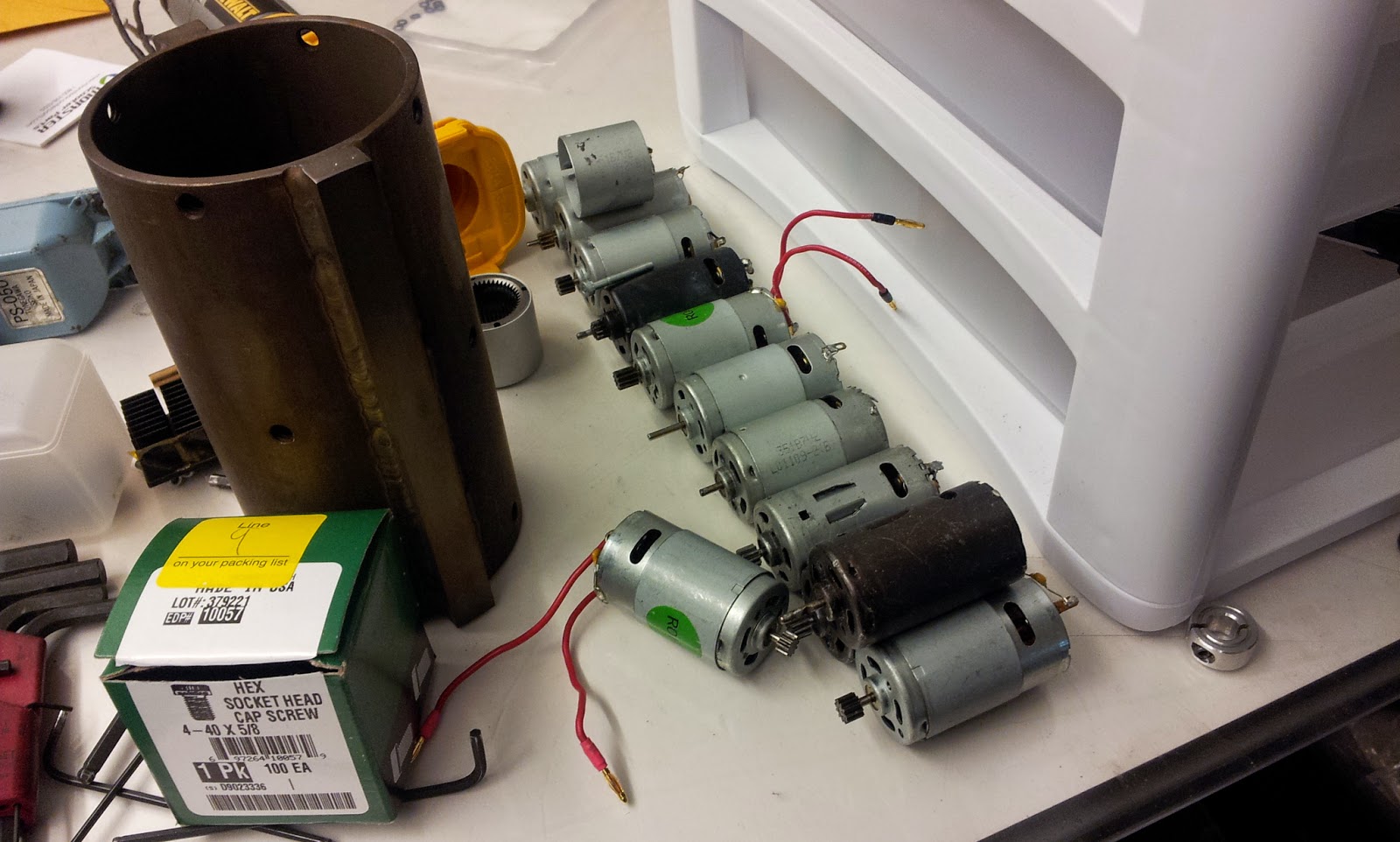 At this point, we are more/less ready to rock. I'll be running some durability tests with Charles between now and then so be sure to check out those vids when them come out. Cheers and bot on! 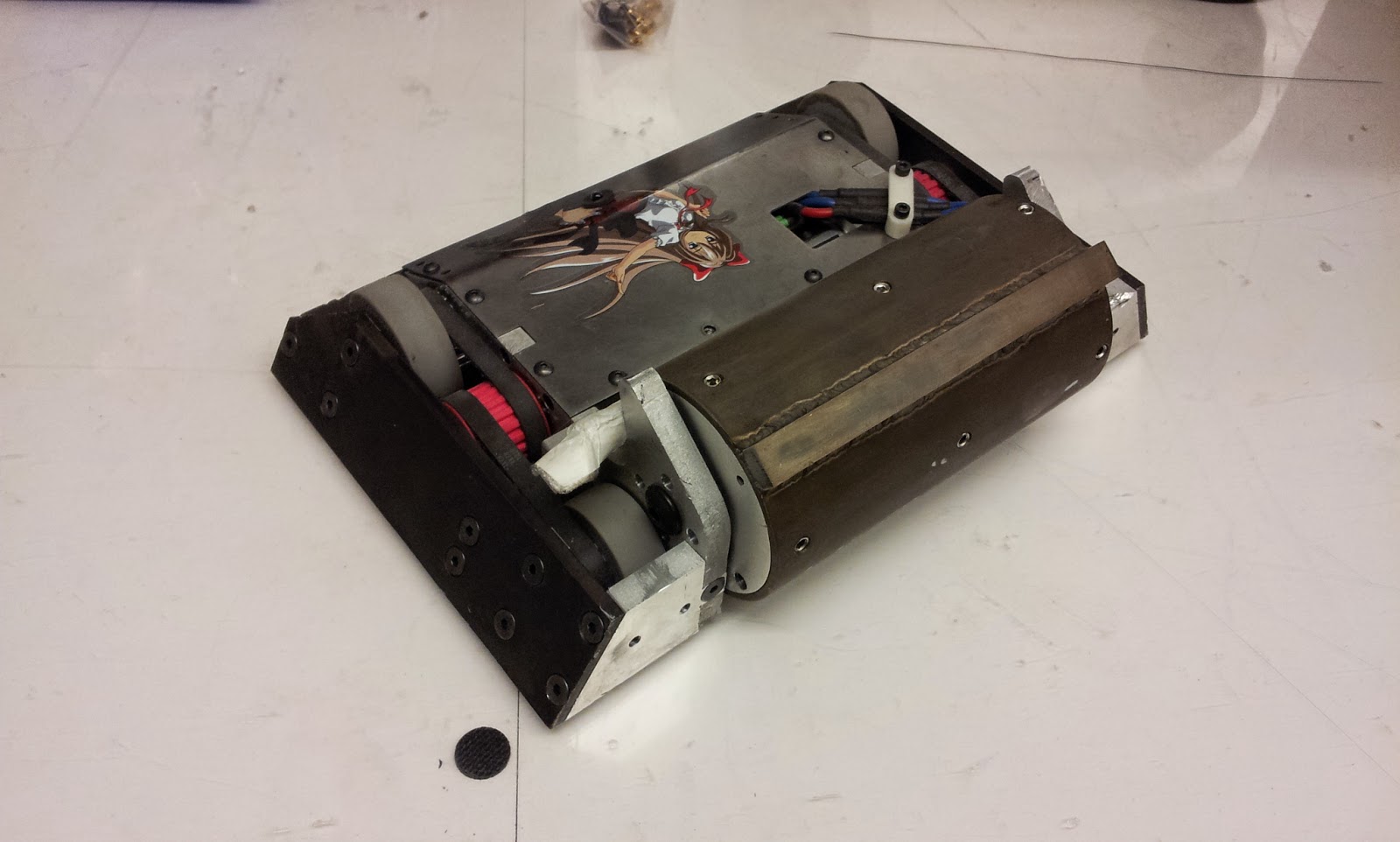