... I'll show you some pictures, and you try to figure out what it is. Ready? GO! 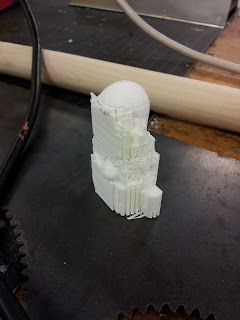 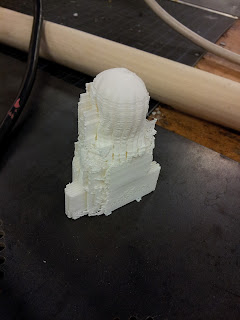 In the meantime, let me tell you about support material on the Ultimaker.

IT IS AMAZING! While it is no Dimension or Objet, it still has settings for breakaway support material. That is, vertical planes of the smallest thickness the 3D printer can muster.

It builds up these support layers along with the main model up until the overhanging layer is met. Then it simply prints on top of the slats. Some x-acto kniving is required but the result is well worth it.

Anyway, the mystery model is... 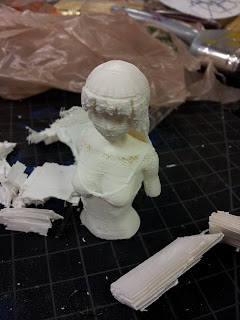 That girl! (Hana) She is from some anime I havent heard of, yet she was uploaded onto Thingiverse. I search for anime occasionally in hopes that Miku might pop up. 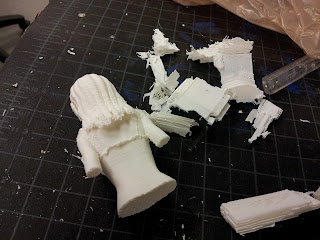 All I had to do post operation was snap off the supporting material. Comes off very easily because of the minimal contact points. 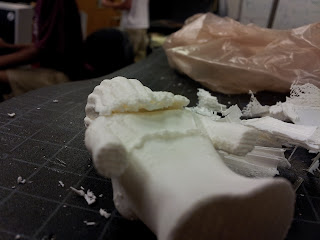 And check this out, her hair is NOT attached to her back. That is to mean they are separate pieces. Her neck is the only attachment point between the head and shoulders. Support material woot!
Posted by Jamison Go at 11:08 PM 3 comments:

A ton of progress on several projects (new and old) went without documentation. SO LET US DOCUMENT.

Razor Wind v1.4: Pneumatic Wheelpod Edition
Colson wear on my scooters end up looking like this after about a month. 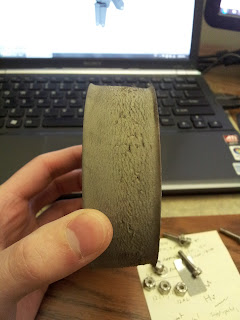 That is, uneven wear, and reduced diameter. Those are supposed to be 4" OD wheels, but I recall measuring maybe 3.5 on the smaller side. This results in not only poor performance on the vehicle, but a danger when turning. The residual lip on the right side results in some drifts on lower angle leans.

I decided pneumatic wheels were worth looking into. Given the hub isn't damaged, I would replace the outer tire pretty easily instead of machining a new wheel every time. I typically strayed from pneumatic wheels because the valve stem was annoying to deal with and I couldn't find any smaller than 6". Until now... 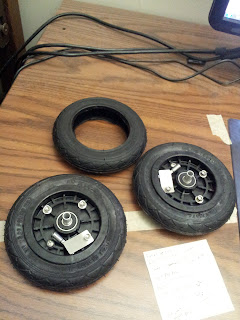 I found these guys as popular wheel choices for mountain rollerblading. Aero 125s v2. (Nordic Skiing?) A bit pricey at $47 a wheel, but I don't expect to be damaging the hubs. At most, I would purchase new tires or inner tubes, which beats out paying $20-30 for new pneumatic casters in the long run. 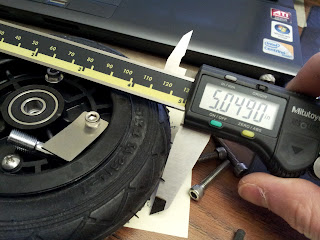 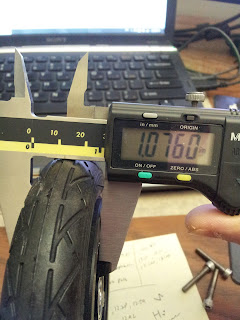 ...and 1" wide approximately. Although they were still 1" OD greater than my current set, the modifications to the frame were easy to make because adapter fork and wheelpod. 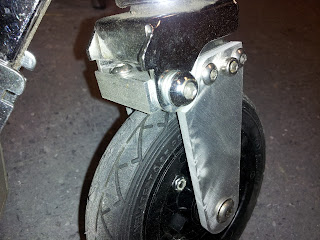 The mating block was simplified to a rectangular bar with the same hole patterns. The fork plates were extended to accommodate the 5" OD wheel. 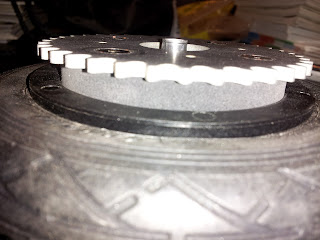 The rear wheel required more work. I waterjet cut a circle from 1/2" UHMW to act as a large spacer. This matched against the inner regions of the wheel hub and the bearing tube for a solid concentric mate. All of it bolted together using the wheel's original bolt holes. 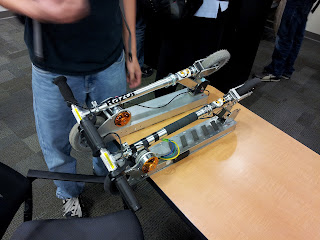 Verdict: Pneumatic wheels are awesome! Increased rolling friction from wheel depression, but overall a better riding experience. Bumps and road imperfections are negligible for the most part. Cost and maintainability are to be seen.

Kawaiicopter v1.0
Its no secret I have an affinity for ground vehicles. I often tell my research associates, "Air and water are were your things DIE". So why am I bothering with an areal vehicle? Well the past spring semester, I partook in two systems classes, one of which was taught by the magnificent Magnus Egerstedt who inspired me to embark on more ambitious projects. So in light of this challenge, I elected to build something that used control theory, which just happened to be a good excuse to learn PCB layout, which ended up becoming a trirotor project using brushed EDFs. OH GOD.

There are a few reasons why people choose quad rotors versus n rotors.


I was well aware of item 2 before embarking on the project. For kicks, I wanted to see how terrible of yaw rotations I would be dealing with.

If you can't have counter rotating props, another alternative are vectored thrust. That is, point the fans in a direction to counter act the rotor torque.

A few hours of modeling resulted in this, a rather hefty cam-driven servo mechanism. I bought three of the cheapest servos I could find on Hobbyking for the vectoring duty. Even if they were weak, it didn't matter. The servos cams were far enough from the point of rotation for maximum mechanical advantage. 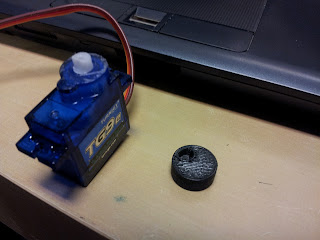 A flat on the end of a servo shaft mates nicely with a 3D printer boo boo which left a D profile on the interior. 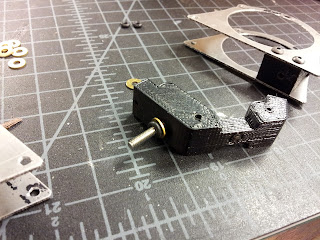 A section of the main body, which holds the life shaft. that is a long 4-40 screw with an o-ring sandwiched between two brass washers. The o-ring was intended to act as a low-compression spring to ensure minimal axial play yet more tolerable surface friction between the moving components. The EDF mount would be threaded onto the end. 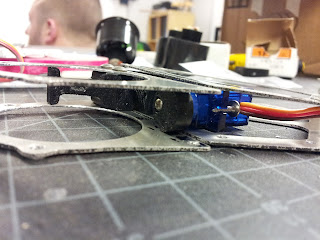 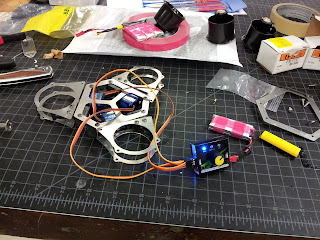 ...and the completed test frame! I'll do use a favor and fast forward a few minutes...

Verdict: it produces an enough thrust to force a rotation! Unfortunately, I maxed out the power supply running three EDFs simultaneously, so we will have to wait for the PCB to see if it can fly. (I still believe in my calculations!) 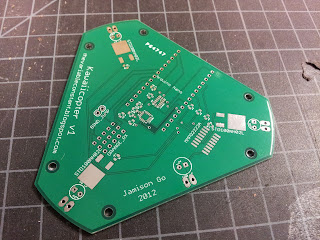 My first PCB! I rushed the design out in about 2 days, which is not too bad. Thanks to Aaron, Xo, and SparkFun for the occasional tutorial or piece of advice. There was a lot of wasted space on the board, but for a flat board rate and first manual traces I though I would keep it simple. Still, it turns out there were a few mistakes. Can you spot them? 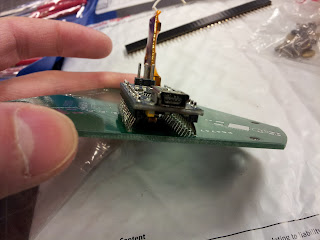 Here is one. Arduino lovers avert your eyes! Oh poor pins...
The other mistake lay in the trace connections. While I'm not sure what happened with my gate drivers, my motor terminals should have been connected to V+ and the MOSFET drain. Instead, I connected GND and drain, which meant the arduino was pulsing a connection from GND to GND. :(

At least the receiver communications worked. This concludes the failed v1.0 Time to move onto the next revision.


Kawaiicopter v1.2 (What happened to v1.1?)
Slightly discouraged, I decided to calm my ambitions. By this time, finals were over and I could no longer present anything for Robot Friday. So lets build a traditional quadrotor with a lighter frame and actually spend some time double checking the circuit this time. 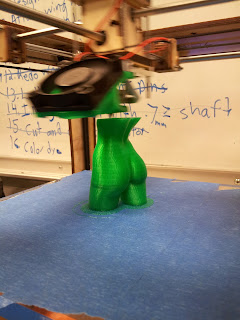 The Invention Studio decided to purchase an Ultimaker, so I decided that and a combination of carbon rods would be a durable and light frame. 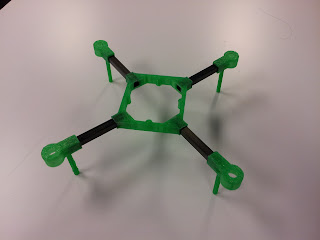 A fine representation of the construction. That is green PLA, printed shortly after the pink panther woman shown above. 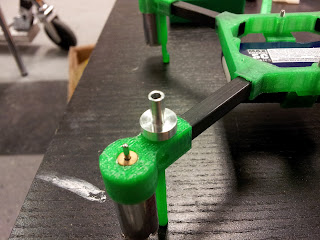 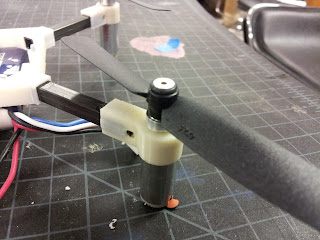 The open end is tapped for 4-40, where an o-ring and flat head screw meets it. This is my version of a prop saver. Enough friction to get it moving, but the ability to slip in the worst scenarios. 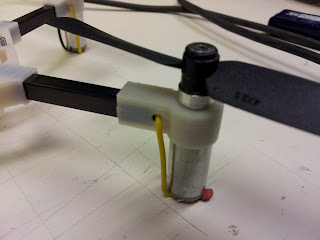 Wires feed into the frame here... 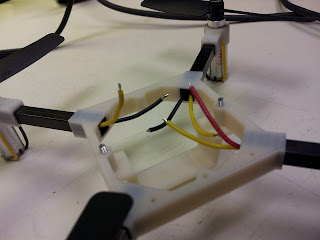 ... and exit into the main body. Much cleaner than most quadrotor builds.


Cuuuuuute. By recommendation of Charles, I decided to skip the gate driver transistors and run the MOSFET directly from the arduino outputs. This short flight test is testimony to its success.

With that said, the new board: 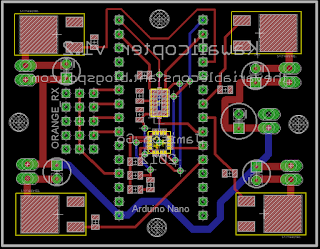 This guy is being made by DorkbotPDX, and should arrive in about 10 days. Only $20 for three copies! Give them a try. 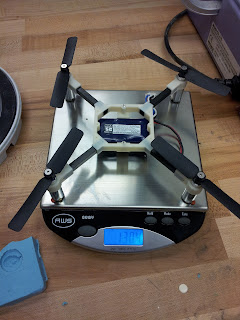 Current weight with battery is 130.4 grams! So far so good.