This is the Remix

I actually began toying with this idea awhile back, but since Cake's drums have become worn I figured it was time to try it out. 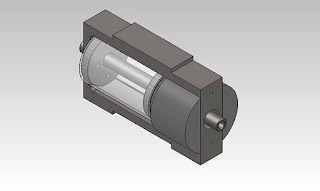 I've generally kept away from it because the internals are essentially open and thus vulnerable to a direct hit. To ensure safety of my motor and electronics, the beater must spin fast and never stop. Those two terms became the primary focus points in a new revision of Cake, which I might end up giving a new name as there are enough changes to warrant a new design.

Besides, I could never supply a very good explanation of why it is named Cake. I guess that rules out Cupcake as a possible name.

I bought a new motor and battery from Hobbyking. A Turnigy 1450kv motor of the same stator size coupled with a 4-cell 1000mAh lipoly. This is a 350kv increase in motor, and 3.7v, 200mAh increase in battery spec. Expect longer runtimes and higher end rpms. No load (unrealistic) of ~21k rpms! Most other spinning weapons sit around 10k - 15k range, so I have no doubt I'll be spinning quicker than them. The exception of course are Gene and Richard's creations (~49k rpms?) so I'll have to design a strategy to fight those. 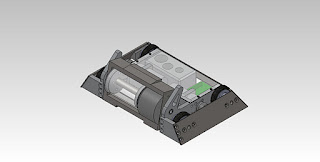 Here is the model. Already I am beginning to like this design because it addresses some of the complications I have found with the drum design. First, there are no endcaps. The beater is machined from a single piece of A2 tool steel, and thus has its endcaps permanently fixed to the knockers. Assembly of the motor will be more complex certainly, but I think the benefits outweigh the complications. 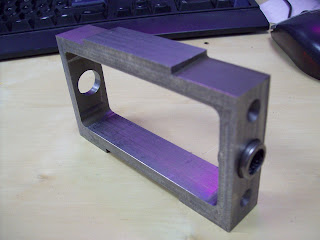 I hope to never need to machine another beater ever again. First, I rough cut the 1" block of steel on the waterjet leaving .01" on all edges. Then, I moved the block to the manual mill, squared all the edges,and removed the extra .01". Finally, I faced the beater. All operations probably totaled to 12 hours of work.

Worst yet, I managed to make 3 mistakes on the part. Good thing I am such a improvising badass. Can you spot the mistakes? 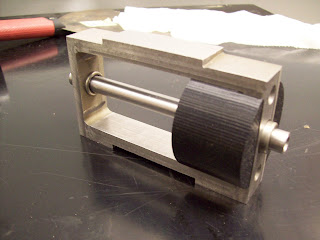 Rapid prototyping the magnet can mount. I blame Charles for this recent fascination in 3D printing. And before you ask, the answer is no. That part will not remain extruded ABS. 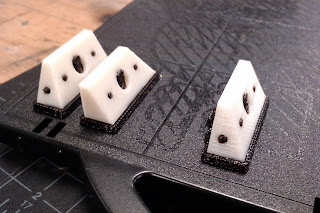 Speaking of rapid prototyping, what exactly are these? 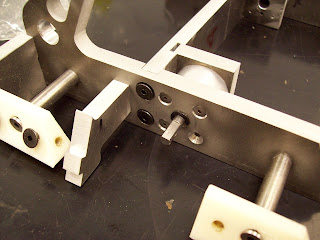 These are the next set of bad ideas in this revision: Angled armor plates and isolated but integrated frame gearmotors. These ideas I've been designing since Attrition but never had the resources to implement it. Times ave changed. While the Dimension spat out the can mount, I had the uPrint mush out the angled mating blocks. The current plan is the remake them from aluminum but I have no patience and wanted to see it all together. 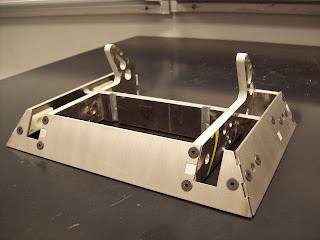 My next goals are to complete the drive system. Some minor complications for the moment: The battery supplied from Hobbyking is just a few unforeseen millimeters too wide. As a result, my Scorpion HX speed controller does not fit as intended. I may need to reinvest in single motor controllers and utilize the 45 degree drive method (Sans mixing). I've also noticed a large amount of frictional binding when the gearboxes are populated. Closer inspection showed the holes to be drilled at a slight angle. UGH! Should I continue with the B16 mod, I will have to bore out the holes to 9mm ON THE MILL for some flanged shielded ball bearings with a 4mm bore. Other alternatives are modifying the "1000 rpm motors" that everyone has been hyping about. I bought a pair (to arrive next week) and plan on swapping the motors out to the lower current drawing KW motors that normally come stock on the B16's.
Posted by Jamison Go at 11:20 AM 1 comment: