Lets relive an event from a few months ago at Franklin Institute 2017... 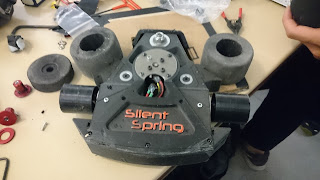 Ouch. But this didnt happen in a way you might expect.

This was Silent Spring's "all-terrain" mode in which the normal lite-flite wheels were swapped out for sumo, D2-esque, tires. These wheels were wider and so the wheel guards had to go. A few minutes into the fight, SS was flying around as usual against the eventual champion Captain Doom when suddenly the tires started flying off the wheels! Ugh! Turns out the foam was held on by nothing more than some hard CA glue which adhered poorly over the injection molded ABS hubs. The other wheel came off shortly after and the match was over.

Needless to say, I dumped that concept about 1 minute after the match but it did raise some interesting thoughts for the future. Wheel science. Most insect builders just buy fingertech foams, lite-flites, or Botkits sumo wheels. How hard could it be to make my own and what was the best material to do so with?

It so turns out that most dragster and model airplane wheels are a neoprene foam but even so that comes in a variety of durometers, or hardnesses. Some closer inspection on the wheel hubs and we discover that the wheels I bought actually originate from TM Racing Components.

They sell a bunch of different compounds denoted by the color. I believe the D2 and Servo City variety are ~30-40 durometers by feel. I am told by another builder experienced in competitive RC that these color designations for durometer dont stay true always between manufacturers. How confusing :/ 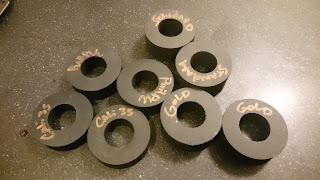 I bought a handful of their custom sizes to experiment. Standard (40), Gold, Cali 35, and Purple (40) in order from soft to stiff. What properties are most important for wheels in combat robotics? A soft wheel will deform under load which is great for impact absorbing and forming a traction patch. However a soft compound might tear easily and subject to damage. A stiffer wheel is a reliable diameter which is important for some designs but susceptible to debris and can transmit loads to the gearmotor. I did some slice tests with a knife and found the standard compound to be too soft; it took knife marks and cuts very easily whereas the other three didnt make a mark. I ended up picking the gold compound for starters because it comparable stiffness to the lite flites I used to use. I might return to this section later with numerical data. 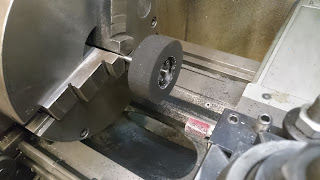 To my dismay, they came in oversized and with varying thicknesses. The ID was true which leads me to believe the wheels are supposed to be trued after mounting. I whipped up my own wheels which adapted to the botkits wheel hubs. They were printed from NylonX and features bolt patterns for 0.625 and 0.770 hubs. 1/4" pilot in the center for concentricity. The plan to true the wheels is to first glue the tires to the wheels and then turn them on a lathe using a round carbide burr. The 0.770 bolt pattern is for mounting to servo city hubs which I mount to the lathe.

If you plan on doing this, be careful of a few things: Make sure everything is properly secured because it is a grippy wheel afterall and can fling things if not well attached. Dont pay too much attenton to the DRO on your lathe unless youre going for repeatable passes. The wheel deforms under turning so you might be overcutting on a pass to get the desired dimensions (but I guess you could calibrate that out if you really wanted to). 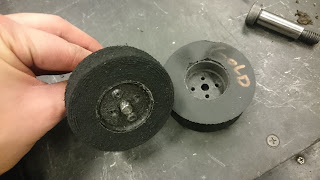 In just a few minutes time, the wheels were trued to desired size! A bit rough on the edges, but I found that a sanding block takes care of that fairly quickly.