Since Franklin, I've only been searching for more ways to use/abuse the MarkForged composite 3D printer. DDT has shown great promise of the device in combat, allowing high design flexibility and better material properties than anything I could have machined (not an advertisement I swear!). Next, I plan on applying this technology to my other robots, starting with Silent Spring; I anticipate printing a new frame/design for the Dec 5th MASSdestruction event.

I also apologize in advance because I have recently seen the new Star Wars twice recently in addition to all 6 movies prior so this post might feel more Force'd than usual.

Converting the v1 Silent Spring to v2 should not have been very difficult since DDT v3 was so successful; there were little to no weaknesses that needed to be addressed. As a result, I followed the same methodology in designing DDT. I'll elaborate more on my design methods in a later post (I have most of it written up I promise!).

As a result, the v2 Silent Spring looks unsurprisingly similar to DDT. I at one point made an argument against myself to remove the pockets but in actuality they have an added benefit to the MF machine. The pockets direct fiber paths in slicing which in effect creates higher density of fiber in places deemed more valuable. 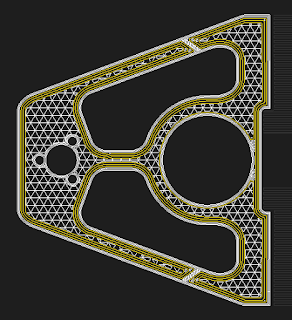 One place the designs may have differed is at the wheel output shafts. On DDT, the wheels are directly drive off the outputs of the spark gearmotors but a similar scheme may not be as effective here because the drive motor options for Beetleweights have shafts which are too small. For example, the B-series motors and Kitbots '1000 RPM' motors  have shafts 4mm in diameter which is disproportionate to the 3mm shafts used in Antweights, like DDT. Therefore I had whipped up a solution where the gearmotor shaft would couple to a larger diameter shaft which was further supported by additional bearing sets.

I ended up ditching the idea when I learned that Mark at ROVParts was selling B-series gearmotors with hardened S7 output shafts. Simplicity woooo! The new design intends on using wheel guards anyway so I HOPE this will be a moot point as such on DDT.

Although the robot was designed as a unibody, the printer volume actually could not handle the Beetle-sized DDT frame and as a result, the frame corners had to be chopped into four additional parts which would be combined into the unibody later using screws and adhesives.

The internals, like DDT, would require some minor electrical work. I purchased a new motor (NTM 35-36) and new ESC (Turnigy Plush 40A) for this project. To make everything fit, I would need to move the capacitors off the board and into a floating unit as pictured above. If you do this, be sure to keep the wires short and thick as they are bus capacitors. Im not entirely happy with this arrangement mostly due in part to the capacitors off the BotBitz ESCs. It is possible I shouldnt need those since i have bus capacitors from the weapon ESC. Instead, I could combine the capacitors and use electrolytics of equivalent capacitance.

The Printer Strikes Back

Just like the new DDT frame, this frame proved to be rather ambitious for the printer. This is by no means saying the printer is incapable, but rather the design needs to be modified to print more reliably. The access hole for the electronics is a removable panel on the back. This opens up to a cavity in the frame which is created by printing the roof over a bed of support material. However I discovered that the printer could not reliably make these features as so the rate of failure was fairly high. As a result, I managed to print the extra items such as the corners, back plate, and wheel guards but not the main frame itself. I will need to develop a interim solution for the Dec 5th event. 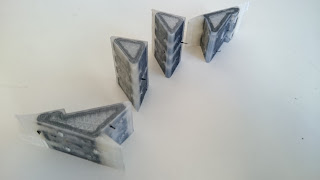 Return of the Old Design

With only ~2 days left, I began a mad rush to retrofit the v1 frame for the competition. As it stood, Silent Spring could compete with the damage it took at Franklin. However, some upgrades were planned regardless and I wanted another chance to try the MarkForged printed material. At minimum, the electrical system was better organized with shorter wire lengths. I also replaced the Turnigy AE 30S ESC with a Spider ZTW 40A ESC. Hopefully this will alleviate spinup and overtemp issues experienced in combat. The Spider ESC was also preloaded with SimonK firmware which has been making quite the buzz lately for its excelling sensorless startup performance; between the higher current and SimonK, I had high expectations for this new ESC.

The v1 frame files were modified lightly to better use additive manufacturing. The back plate was extended, thickened, and pocketed to provide coverage over the motor pulleys and provide additional space to hide the BotBitz ESCs.

In the A-frame section, the trusses were thickened and the motor mount holes were made slightly taller. These changed allowed for more carbon but also reduced the overall part count (the aluminum "C" spacer could be removed). Another fun change was switching the round hole to a hex hole in the interface wings. Normally, this section required a large hole for a socket to reach the locknut. Now, the hole could be changed into a hex designed to fit the 3/8" hex such that no additional tooling was needed to tighten the outboard shoulder screws. 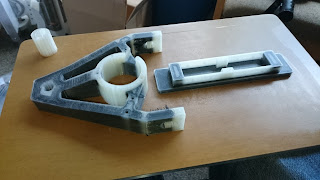 Both of these printed parts finished at 1pm Friday, just hours before the event Saturday morning. Both parts came in lighter by ~50% compared to their SolidWorks projections for "solid" material yet were about as a stiff and a 7075 aluminum frame. 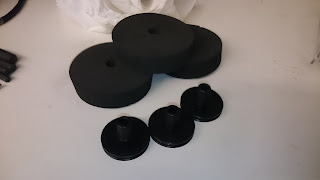 I took the opportunity to make a few other changes as well. I fell in love with the Fingertech Robotics snap hubs so I decided to make my own. I further integrated them into the drive pulleys as shown above. This provided a minimal solution to indirect drive with easily swappable wheels. 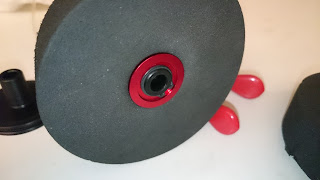 A few hours later, the electronics were transplanted into the new frame to yield the final result. 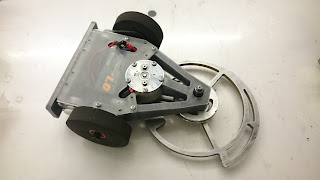 Currently the downside to printing with these composites is the inability to effectively weight budget. When I print these parts, I don't yet have a way to estimate the total mass of the parts and therefore I often overestimate to guarantee all parts comply with the weight class. This means I often have leftover weight which goes unused. 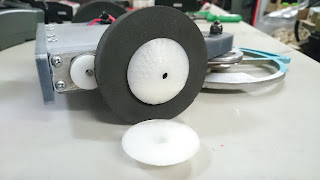 To attempt to top off the scales before the event, I printed some press-on shaft covers to prevent vertical spinners from dinging the ends and bending the shaft. They worked about as well as you might imagine for a last minute addition (hint: total crap).

Thanks to Will Bales and the food I bribed him with, I was able to get a ride to the Artisan's Asylum in the wee hours of the morning. We unloaded and shared a pit table tucked behind someone's chair making bench. This time the attendees were looking pretty serious. Among them were Kyle Singer (of the Ripto robot series) who brought Dick Dastardly and Brandon Nichols who bring his multi-time champion Mondo Bizarro. Best Korea was now sporting an enormous 10" undercutting bar which out ranges pretty much every Beetle in the world. I also think the number of WPI kids in attendance doubled since last time. Absent from the fray this time was Jim Fox and his kids who usually bring Puppy, a durable and powerful wedge robot that beat DDT twice last MASS-D.

Both robots did well; DDT went undefeated and took 1st in the Antweights while Silent Spring suffered only one loss in the finals and took 2nd. 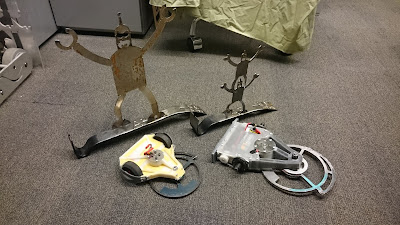 I felt pretty good about the new frame and new components in the v1-style frame; based on its previous competitions, I expected about the same in performance and it did not disappoint. However, the flaws noted previously in the v1 style frame also manifested themselves which ultimately lead to its demise. This event demonstrated the importance of the v2 modifications in any future iterations of Silent Spring.


Silent Spring got off easy in many matches. In the first match against Dick Dastardly, Kyle's radio suddenly went bonkers after the first hit and he lost control of the robot; Thus losing by disqualification. Best Korea definitely boasted the superior range and even sliced a third off one of SS's tires but his reign of terror ended early when his belt came off. Herpaderp came out strong and aggressively attacked SS. Although Will was careful to not repeat his mistake from the Oct 10th event, he accidentally flipped himself by turning too sharply and was stuck in the corner. By this time, SS was limping. Both drive shafts were bent and their wheels were missing chunks. It managed to hobble around enough to beat Dembitz and Ginger Baker but was no match for the battle-ready Mondo who was likely seeking revenge for the KO at Franklin. By the end of it all, SS had some nice dings, 2 bent shafts, broken hubs, 0 wheels, and a belt blade.

But seriously guys, it still works. I said RETIRE it not disable it. :/

This time around I had the privilege of testing out DDT's frame against more spinners. Usually because of the design, DDT seldom gets hit on the frame but this time he met a horizontal spinner with a longer reach. Despite the questionable trades, DDT managed to pull out the win in each match and the win overall.

DDT's arch enemy this time around was definitely Spare Parts. In the first match I got a lucky swipe and took out a drive wheel. After that I carelessly charged into his weapon head on to "test the durability" of my front armor. This ended up being my undoing as his longer reach eventually broke through the belt guard and snapped the belt. At that point I thought I had lost but to my surprise the judges deemed his immobility more valuable than my lack of weapon. In the finals I decided to be more cautious by avoiding front hits. I knew my side armor could sustain blows and used those to take the blunt and then turn in to slice his unguarded wheels. Soon after DDT had won by KO.

Even without the v2 upgrades, the CF/Nylon printed v1 frame proved more than sufficient to withstand the big hits from some of the best Beetleweights in the North East. In addition, Silent Spring's performance showed how effective the SimonK firmware ESCs can be in weapon spinup; You'd better believe I'll be trying my hardest to get the Spider ZTW ESC into the v2 design as it may be my new favorite ESC over the Turnigy Plush.

The next MASSdestruction is coming soon on Jan 23. This time it will be hosted by WPI and its unknown as to whether I'll bring new robots or any robots at all. Stay tuned for more. Bot on!