Those who have seen the beetleweight rumble from the AMMF event will remember that Dominant Mode's drive began failing at the end. With GMX on October 26th, it was time to investigate the source of these issues.

That doesn't look healthy. The cylindrical shaped piece on the table is the front bushing for the KW motor, which had fallen out in all the excitement. It was accompanied by a nice layer of brass pinion dust as it seems to have evaporated in the misalignment.

I determined that the main faults of this mod were the improper mating of the KW motor to the 280's face plate mount and the inadequate length of shaft used to secure the brass pinion. Because the stock face plate was not intended to mate to these motors, it allowed all sorts of slop in the alignment of the gears. To reach the first cluster gear, the pinion had to be mounted on the tip of the KW motor since the KW motor shaft was sufficiently shorter than the 280's. This meant there was a poor friction connection between the motor and the pinion, and an even worse connection between the pinion and its first cluster gear. No amount of JB Weld could remedy the situation.

The solution was the remake the motor face plate. This new version would need to have features to properly made the motor concentrically to the gearbox and bring the motor shaft closer to the first cluster gear. I found that a simple flat of 1/8" aluminum was sufficient. 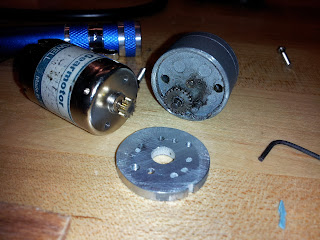 I made several mistake in the model, but I had the main bolt pattern correct so I was able to match drill the new piece. 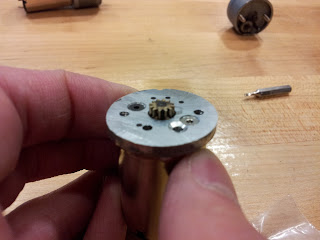 The full length of the pinion is now available for contact despite being pressed fully onto the shaft. This was complimented with JB Weld. The internal shafts in the gearbox did stick out the back of the new face plate so the entire end was belt sanded to make that surface flush. For the record, the main two screws that bolt through the gearbox are M2.5 and the pins are 2mm dia. I will make this face plate available as soon as I develop a proper model.

The gearbox and resulting combination. Because I couldn't find the loctite, I opted to JB Weld everything. Hopefully, its insane bonding power will be sufficient for holding screws.

Meanwhile, I have been planning a new antweight in light of Dragon Con Robot Battles. Colson Bot was fun, but not entertaining enough for my tastes. It was time to revive the champion of entertainment: DDT. 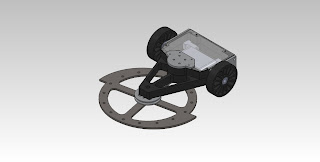 The main idea was to waterjet two slabs of UHMW and stack them together to compose the main frame. The weight for this upgrade would come from a smaller battery and smaller drive motors. The banebots 24:1 gearmotors were overkill for moving an antweight. Instead I opted for the brass micro gearmotors found at pololu. These would be belted to two dead shafts holding the drive wheels. This drive assembly would be mounted to 1/8" 6061 aluminum plates to keep everything in alignment; I wouldn't trust UHMW to stay rigid enough.

The newest version sunk these plates into the UHMW sides. While the disk remained the same, the weapon was upgraded to a Hacker A20-20L. Similarly, the battery was decreased to 460 mAh, but increased voltage to 11.1 V. This meant approximately 11 kRPMs! 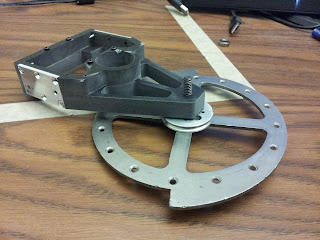 The frame was waterjet with through holes for alignment. First some small nails were inserted to keep it together. Then the side plates could be pressed in and drilled. This assisted in assembly of the rest of the machine. 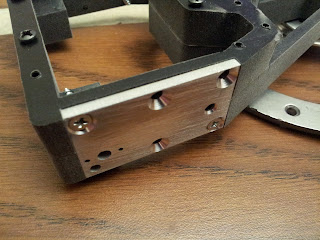 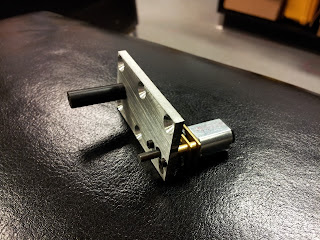 Drive module. Those are M1.6 cap screws that go through the front plate of the pololu gearmotors. The dead shaft is 1/4" delrin for the time being. 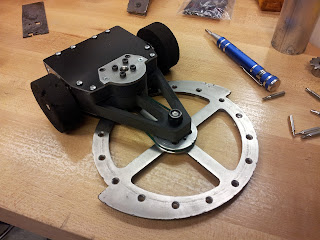 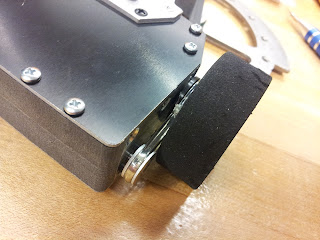 The belt system for the drive. The motor side pulley is 1/2" OD for a 3/32" urethane belt. The wheel side has a 5/8" OD and is made of delrin. To simplify the assembly, I am using the bearing properties of delrin instead of opting for bearings or bushings. 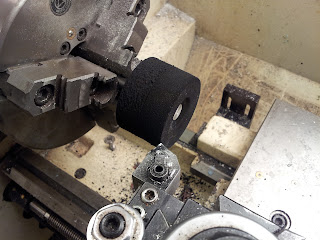 When I had first purchased the new lite flite wheels for the robot, I had planned on using larger 2.5" diameter  wheels. Now that I inspect the design, it would must better benefit from smaller wheels. With only 2 days before the competition, I decided to try turning neoprene rubber. I shoved a 1/2" aluminum shaft into the inner diameter of the foam wheels and placed them side by side on my lathe. I spun them at 755 RPM and made .03" passes with a sharp carbide bit. It was messy but returned great results. 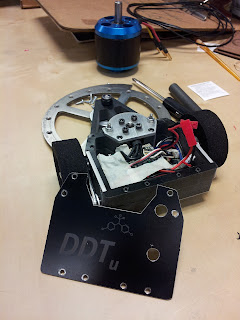 The top cover after engraving. Included is the molecule so others can make the connection. DDT the pesticide, killing the antweight robots.

Robots. One week ago, the second annual Atlanta Mini Maker Faire held its first ever robotic combat event primarily organized by yours truly. It seemed like an opportune time to feature destructive machines given the audience and zany maker atmosphere.


The competition shall be composed of two sets of rounds:


Qualifying Rounds
Each match will consist of 4 entrants in a 2v2 format. The alliances per match are random. The winners of the bout are declared when both entrants of the opposing team are incapacitated, unable to display controlled translational movement, or are ejected from the arena. Match length will be 3 minutes. If any number of devices on each team are in the arena and still able to display controlled translational movement, the winner will be decided by a judge’s decision.
At the conclusion of each match, points will be awarded to each robot.


*0 points will be awarded to robots that do not attend their designated match time.*

Robots with byes will be compensated with 2 points.

At a specified time designated by the event organizer, the points for each robot will be tallied and the top 4 devices will advance to the Elimination Rounds.

This new format is advantageous because it allows robots to maximize the number of matches they fights in a more condensed time period. However there may be possible conflicts regarding the recharge time typically allotted after each match. This value, of typically 20 minutes, would then drive the frequency of the matches, especially for events with a sparse number of robots. The main negative to this format is the amount of pre-planning required. Walk-up registration is difficult to plan given that most of the match organization is currently done by hand. This would require pre-registration unless an algorithm is used.

For the AMMF, we had 12 robots by the time registration was done; that is, 6 ants and 6 beetles. Michael Jeffries of Near Chaos Robotics assembled the match line up with some quick wit. The idea for the AMMF was to attempt to allow the builders to see the attractions of the faire by hosting matches at preset times during the hour. In the case of this event, every half hour. However, given the low number of robots, it meant that competitors at best case would have a max of 1 or 1.5 hours to look around assuming they don't have robots in both weight classes.

I decided not to enter any of robots directly since I believe the EO should never win their own event.

Cool trophies for the winners of each weight class and rumble. 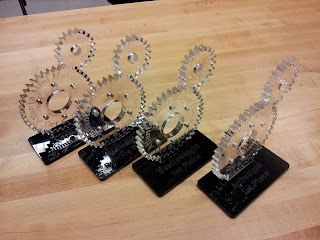 These were simply laser cut acrylic pieces that were pressed together and then welded using acrylic solvents.

We were placed at the base of the stairs between the CULC and Skiles buildings. It was nice and shady, and the stairs offered free seating for the crowd. 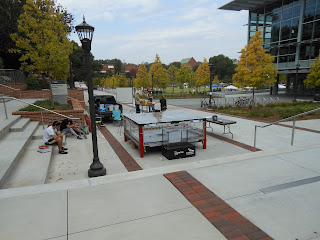 The stands were quickly populated by makers and crowd alike. 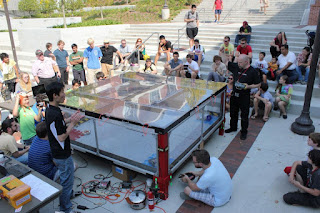 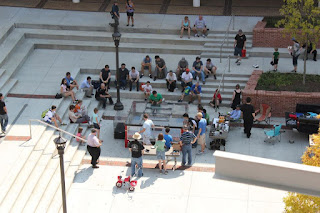 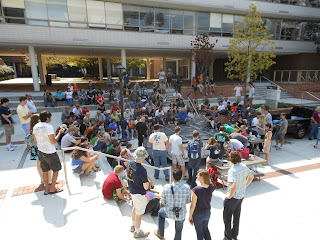 I was honestly surprised at the number of attendees. The competition was assembled rather late and not actively publicized yet we had massive waves of viewers throughout the day. Equally impressive were the robots.


The best part of the team format is that no matches were particularly boring. There was always at least one spinner which made from a lot of excitement. Some of the most notable matches at embedded below.


By the end, I decided to have some fun too and threw Dominant Mode in the beetleweight rumble. I'm not supposed to win my own rumble.


More videos can be found at the Near Chaos Robotics Youtube Channel.

With that, I'll call the event a success. The team format was proven to be a big hit, although I think more has to be done in consideration of the builders. This format is great for the audience but the time between cycles on robots is incredibly small. This left very little time for other builders to see other exhibits. In a normal competition where robot combat is the main event, this might not be as large a problem. Still, it might require back to back matches or lessened recharge time. This implies that the team format is best done with a large number of competitors.

Huge thanks to the competitors and members of the robot community who helped set up. This means Randy, Rob, Mike, and several others who not only helped setup brackets, but unload the arena and bring robots so we can have a good show. You guys made this happen!

'Till next time, BOT ON!