Return of the Roboteer

After exploding over $160 in brushless ESCs, I've decided to take a break from electric vehicles for the time being and get back to the finer points of combat robotics. Last year I had begun the development of a nifty angle-armor design with an eggbeater for a weapon. I tried to utilize the full capabilities of the Invention Studio, but I realize now I was missing the mark in design. So with that said, a few modifications: 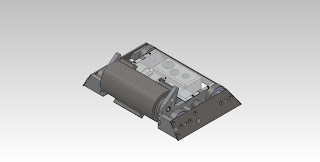 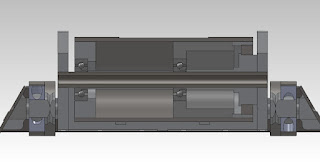 In light of my new fondness for systems controls, this new version will be called "Dominant Mode".


So once again I began building without documenting my steps (building gets too exciting to grab a camera, ugg). 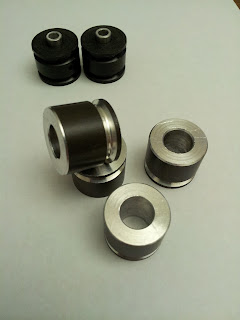 Began by machining my wheels. That is .75" dia case hardened Al shaft wit ha groove for my urethane belts and a 3/8" bore for my bushings. A 1/4" dowel pin will press into my main frame rails and act as shafting for these guys. Like so: 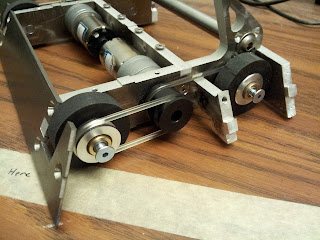 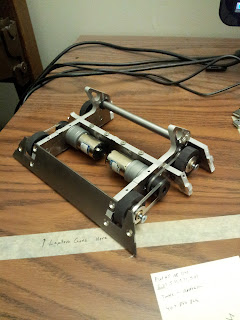 Pretty sweet eh? I might be able to drive it soon! The urethane belts were custom made using cord stock from mcmaster-carr. Just hold the ends over an open flame and push them together. Removing from flame, the urethane will cool and fuse together. Then clip off the excess. 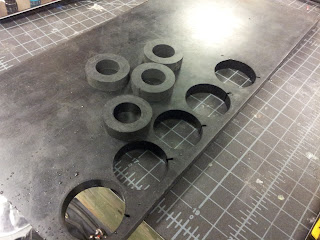 The actual tread come from a 3/8" sheet of 60A durometer SBR rubber. WATERJET GO! 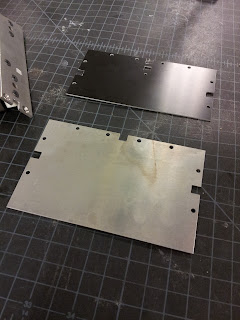 The black plate is the top made from anodized 5052 Al and the bottom plate is 7075 Al (nothing but the good stuff!). Both are approximately 1/32" thick. I am really looking forward to engraving on the top. I'll pick some rather aggressive exponential to drive the "Dominant Mode" point. 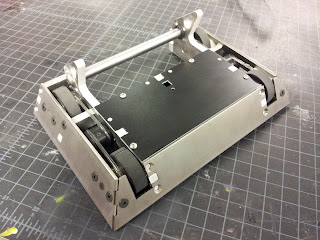 Over the weekend, I took the liberty of wiring up the robot. Knowing how little space I had remaining, I ended up with the electronics cube. 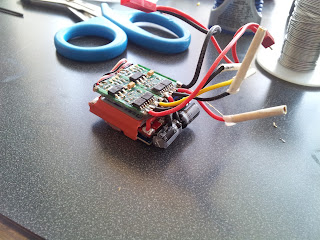 The bus caps on the weapon esc actually had to be resoldered to the board in a strange parallel combination. I had a chance to try my p0w3r bus idea again with the escs. The entire assembly is stuff! 10 points to the person who can find my receiver. 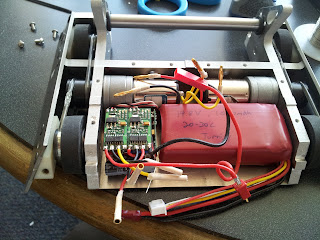 In the bot. I later surrounded all the surfaces with foam padding. ESD of course.

So some of you may be wondering, what will happen to that champion bot Cake? Well since I didn't end up using my B16's, scorpion HX, orange RXs, or my TP 3s 800mAH lipoly, I could very well reassemble! But with a special modification... 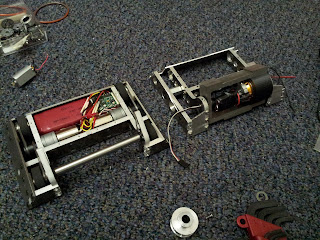 Next time, videos of driving and drum components build!

It took about 10 minutes to fix the damage brought from Friday's disaster. I decided the best (aka most economical) solution was to scrounge for some countersink 1/4-20 screws and use some low profile nuts or locknuts to secure the angle bracket to the base. The main difference here is that the bracket is secured from the bottom instead of tapping into the soft aluminum from the top. WE HAVE REAL STEEL THREADS!

I realized how my locknuts wouldnt give clearance to the folding joint parts. Luckily I found some 8020 hardware to abuse. 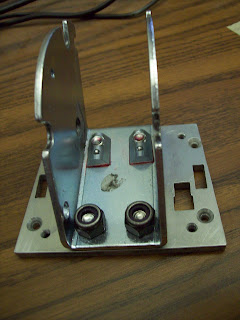 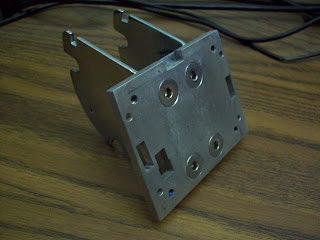 Don't tell anyone how much money I just wasted, but it worked hella well.

While I was at it, I looked to repair the damaged throttle also from last week's fall. The thumb stick had broken off, and the soft plastic parts had deformed enough to impede the movement of the throttle ring.

To replace the thumb stick, I drilled a hole into the remaining surface, tapped it for 4-40, filled the hole with loctite, threaded a 4-40 standoff in its place, and finally immersed the entire thing in goop. 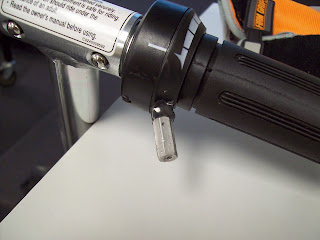 I tried to cut away the obstructing material with my handy dandy knives but to no avail. Without lubercant in sight, I decided to waste some of that (damned) silicon thermal compound in the joint.

Surprisingly, it worked really well!
Posted by Jamison Go at 2:51 AM 1 comment: