Last Week and Next Week (PA Bot Blast and Otakon)

Finally, a weekend where I am not rushing about to see new places or compete against other sentient beings. However I have stuffs to prepare for next week so after 7 hours of straight soldering, I elect to type up a post while I am still on a solder fume high (no not really).

Made the drive from Maryland to Pennsylvania for my first ever PA Bot Blast event! Driving up to Harrisburg in the wee hours of the morning but when I started up the road to Bloomsburg things sudden looked very hilly and untouched. Towns built into the valleys of the massive hills, which were covered with trees; to be honest I felt like I was in a northeastern Costa Rica. 7 halves hours later I arrived at the Columbia Mall and prepared to set up.

I brought P150, DDT, and Cake to represent the south. I hadn't really run these robots since April, so I assumed they were in working order. Boy was I in for disappointment. P150 and DDT both went 1W:2L for seemingly dumb reasons. They both lost wheels in their first matches. P150's was removed by hedgehog's angled cutter (and P150's poor control), and DDT's seem to have fallen off by chance (when Fangus and DDT hit, he popped the belt off the pulley, jamming the blade and spinning the robot, which threw the wheel off. If Fangus was the cause, my shaft would be missing). They then proceeded to defeat robots in their expected fashion only to lose again disappointingly. Some additional thought needs to be put into these robots.

Cake made a wonderful representation! 4 wins and 2 losses, both losses caused by One Fierce Lawn Boy from Fierce Robots. Every match ending up in KO. Videos below.

The money shot of the event. The final hit between Ripto and Cake in the loser's finals match resulted in Ripto being lodged between the lexan and the outer barrier. Ouch.

Jeremy ran a very professional event. Organized procedures, match listings, and even had clarifications for the grey areas of robotic combat. Needless to say, I'll be returning if I am in the area again! 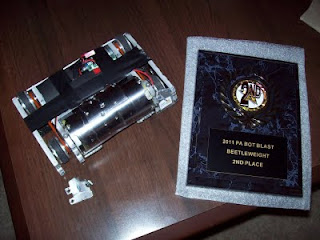 Next week will be Otakon, the largely anime convention in the Baltimore area. Now, I am not a huge fan of anime, but I do like to create. I had my Tony Stark, Iron Man costume shipped up to me during Independence Day break so I could work on it. A few upgrades ensued.

First I decided to add a blue tint to my LEDs. Feeling resourceful, I merely took a marker and drew on the outer surface. Nothing fancy. 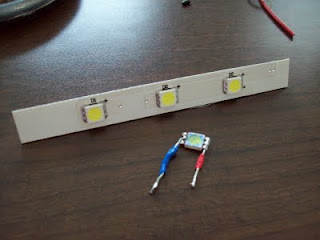 The other upgrades were all for my sanity. I redid the wiring to be much more robust and clean. At Dragon Con, I had several problems with connections breaking and repairs required. This time, all solder joints were solid, shrinkwrapped, and glued. 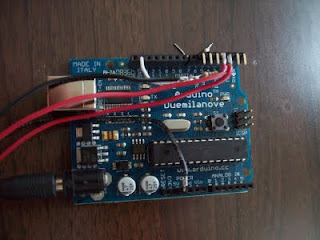 It is a loosely kept secret that I am not currently residing in Florida or Georgia this summer. As a result, summer term creativity has been pretty mute.

Some might call it slacking. I've reacquainted myself with Team Fortress 2 and all the hat(in)sanity. I've also been experimenting with this new Google+ object. Both of which I am proud to say, I HAD IT BEFORE IT BECAME FREE.

Anyway, I've not been slacking. PA Bot Blast will happen this upcoming Saturday and my robots have been ready since April. Each one of them snuggled in their little bubble wrap blankets, suffocated in duct tape. It is time to check on them.

This week I will begin cycling batteries and practice driving. I am confident each robot will put on a spectacular show, but by no means will this be an easy competition. If you are in the PA area, I encourage you to visit the event in Bloomsburg, PA.

In other news, OTAKON! I've registered for an anime convention I felt like attending and so preparations begin! I had Irony Man shipped up to my location so I can work on him. Upgrades are expected. I'll be using a arduino mini instead of the Duemilanove for size and simplicity of power routing (since I can run the mini off 3.3V, and hence require only one cell). I'll also be running some Luxeon super bright LEDs instead of the current modules.