After Motorama
MegatRON was pretty sad offensively  after Moto. In its fight vs Shaka, the dustpan was wrecked. Although Adam helped reweld the pan for the rumble, the pan was once again split open by Hyperactive and 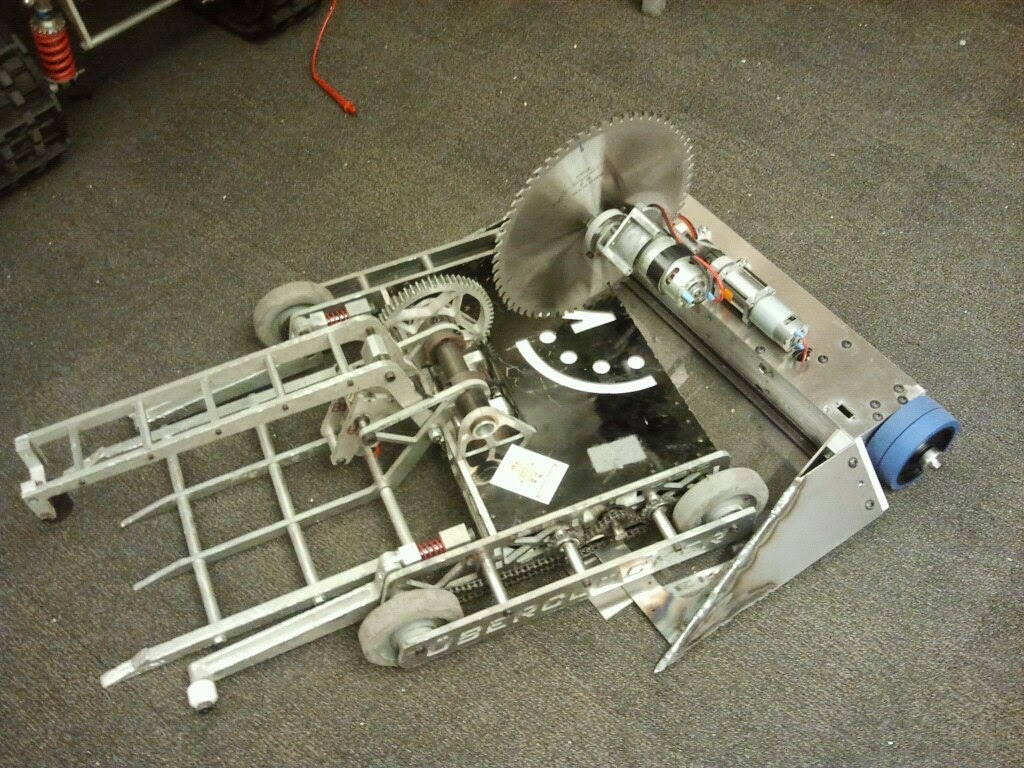 The Love Robot
To satisfy the rules of Robot Battles, the robot had a tip speed limit for all spinning weapons. This meant that the saw cutter could no longer be used with its current configuration. Instead I opted for a lifter and clamper mechanism similar to that of Uberclocker but utilizing the same hardpoints on MegatRON and general dustpan shape. After a first-pass concept, I flushed out the below design: 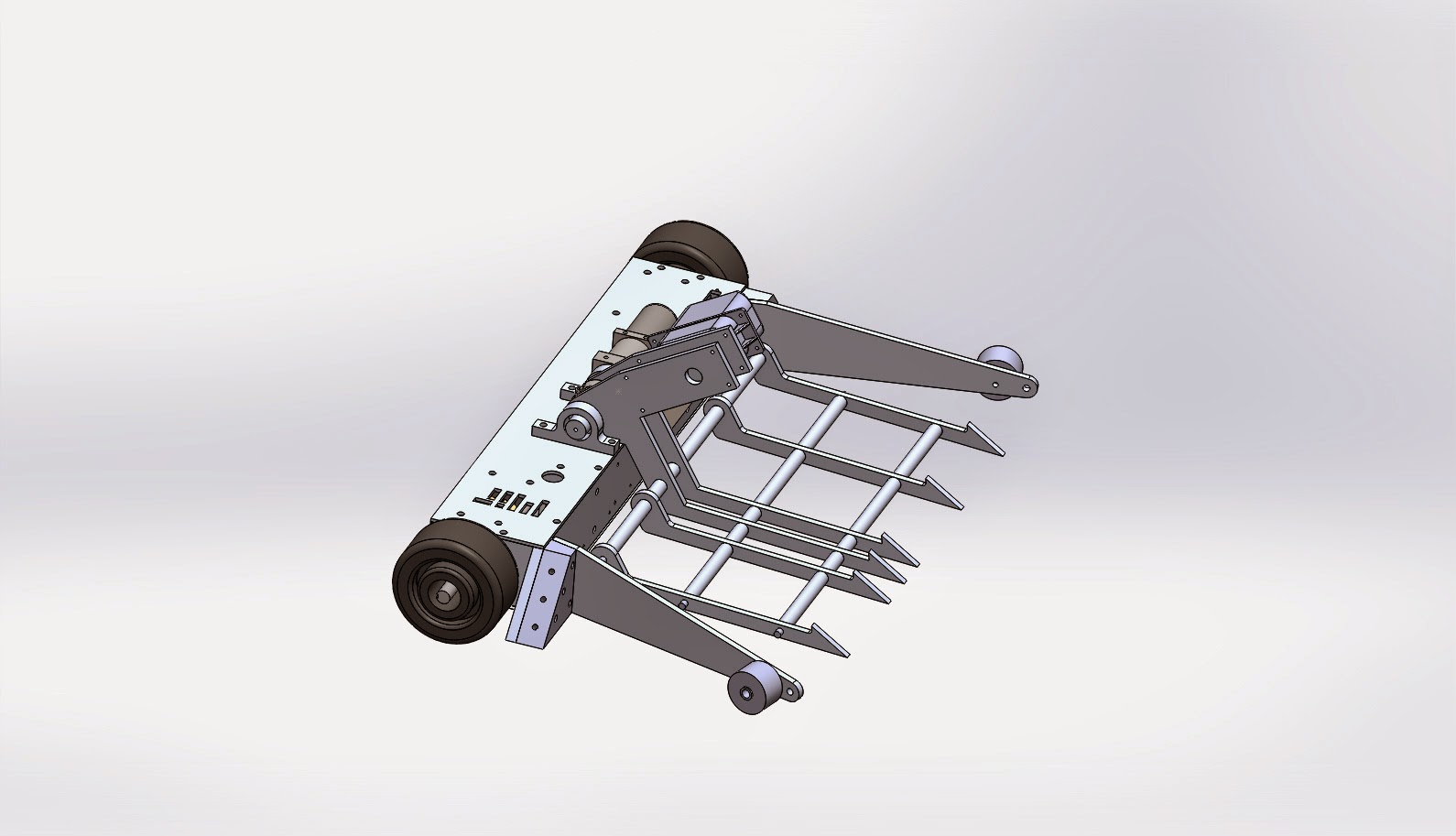 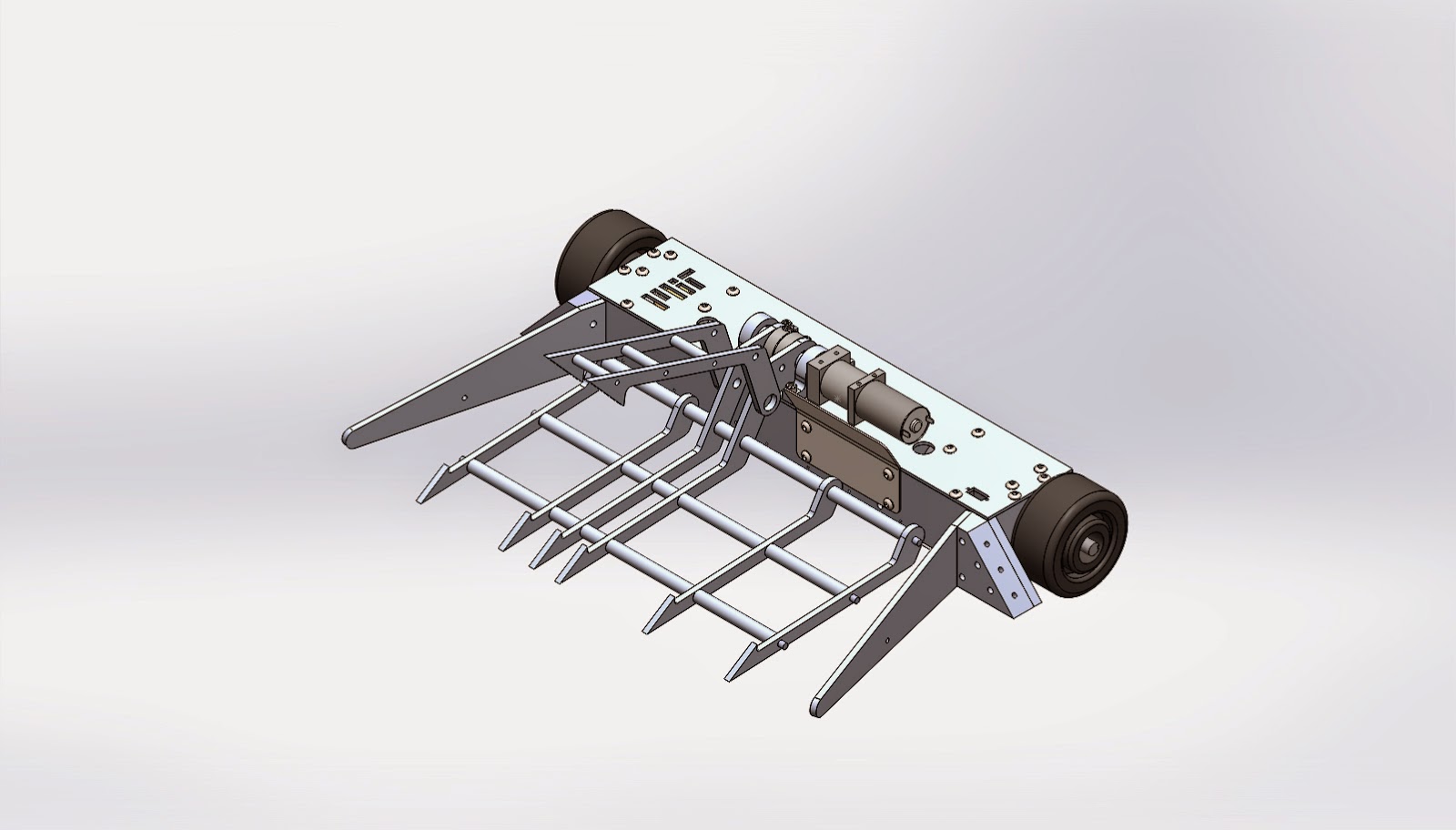 Looks too much like Uberclocker to me although the components are different. This design uses dual Banebots P60 132:1 gearmotors with RS550 motors. At ~10 inches from the pivot point, this configuration should have tons of lifting torque at the tip and more than enough speed to boot.

Additionally, I was feeling extremely lazy at the time. Not only was I taking courses and doing research but I had an industry short course of my own to teach and a conference the following weeks that needed a poster that I had not made yet. In short, I was strapped for time. If I didnt have the gearmotors on hand for the project, It couldnt be done. 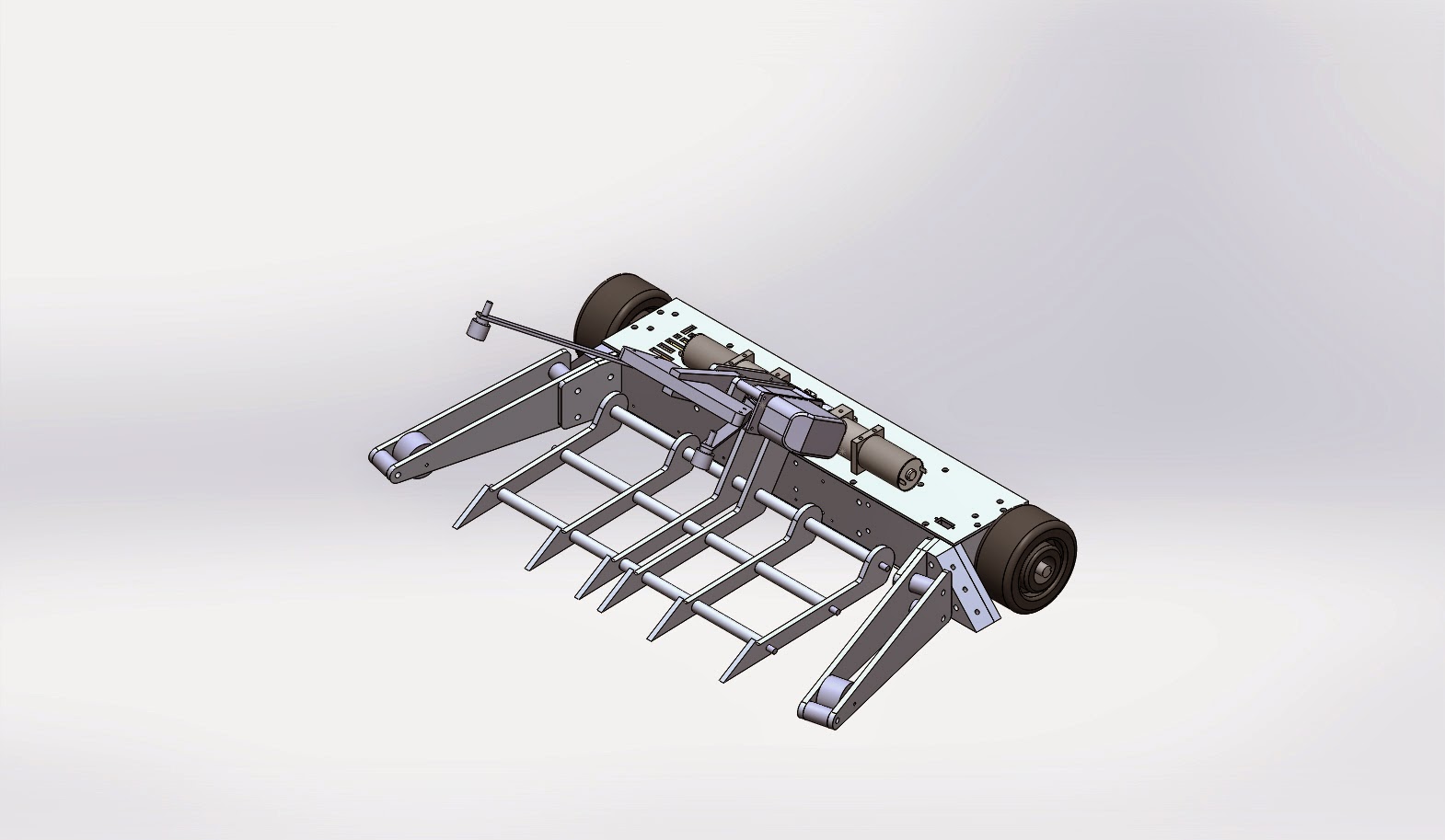 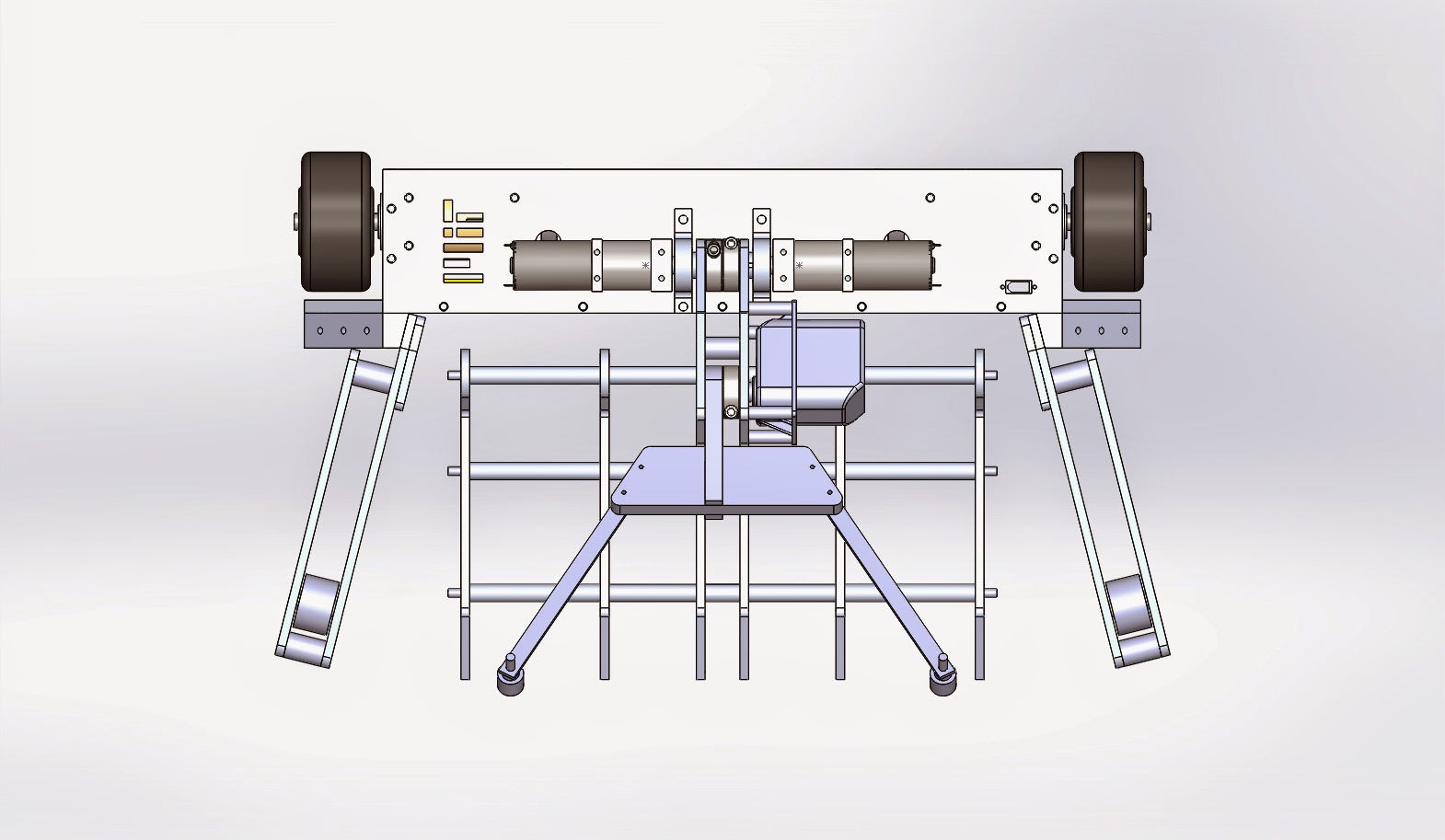 This design turned out to be more feasible. Say, what is that beastly box object tied to the main lift pan?

It is a Tonegawa PS-050 super ultra mega cray servo! I found this sifting through old FIRST and decided to give it new life. This guy would make the top clamp arm at over 1200 oz-in of torque!

However, the servo has plastic gears which are still concern for stripping, especially in this high torque application where backdriving is a possibility. Similar to the lifting pan, I will integrate a slip clutch to relieve the servo under torque but also use spring steel strips as the gripper mechanism. My hope is that the flexibility of the steel is enough compliance to prevent damage to the servo.

The real challenge was converting the servo horn into a more useful medium. I had two options. The first involved milling a relief into the face of a shaft to match the servo horn geometry such that the horn could essentially sit in the relief and transfer torque by twisting against its features. The second option involved modifying the horn to essentially emulate these servo spine shafts from Servo City. I decided towards the latter for ease of support. Below, I describe the steps I used to create the part.

First I turned the horn into a round. No particular diameter, but the more nylon meat the better. 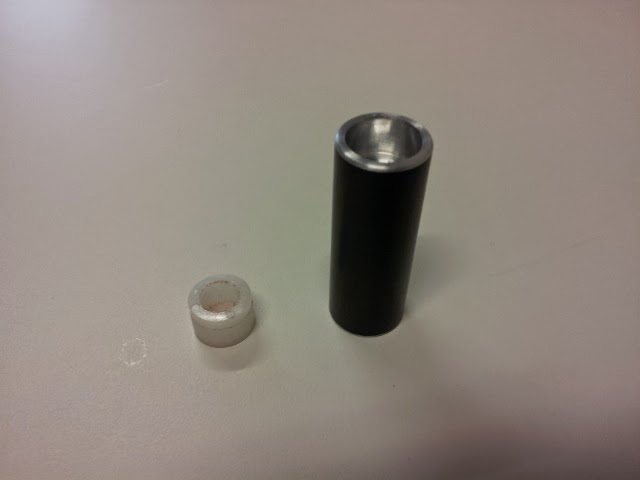 Next I counterbored both ends of the ceramic-coated aluminum shafting. One end should press fit the nylon servo spline but the other end diameter mattered less since that feature is only meant to pass the head of the servo horn screw. In this case, I needed a through diameter for the head of an M4 screw. 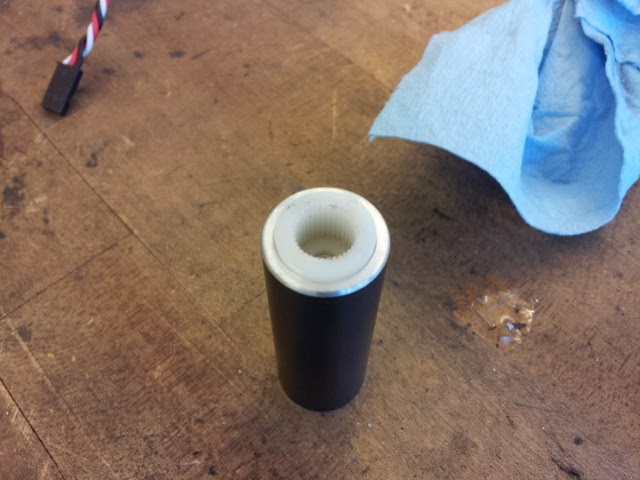 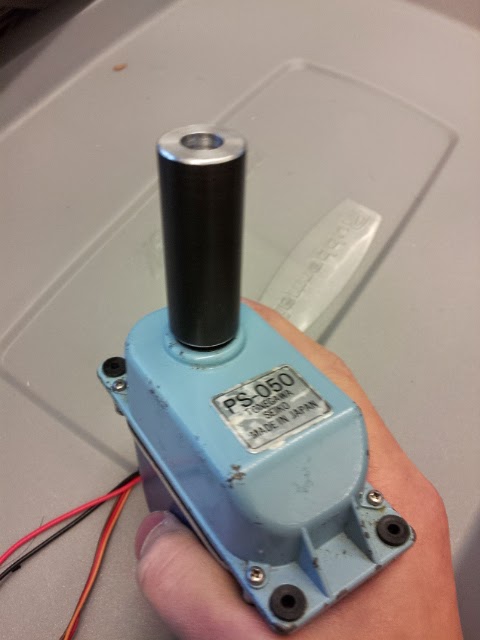 I pressed them together and drilled a #2 radial set screw for good measure. I could now assemble the servo shaft assembly. 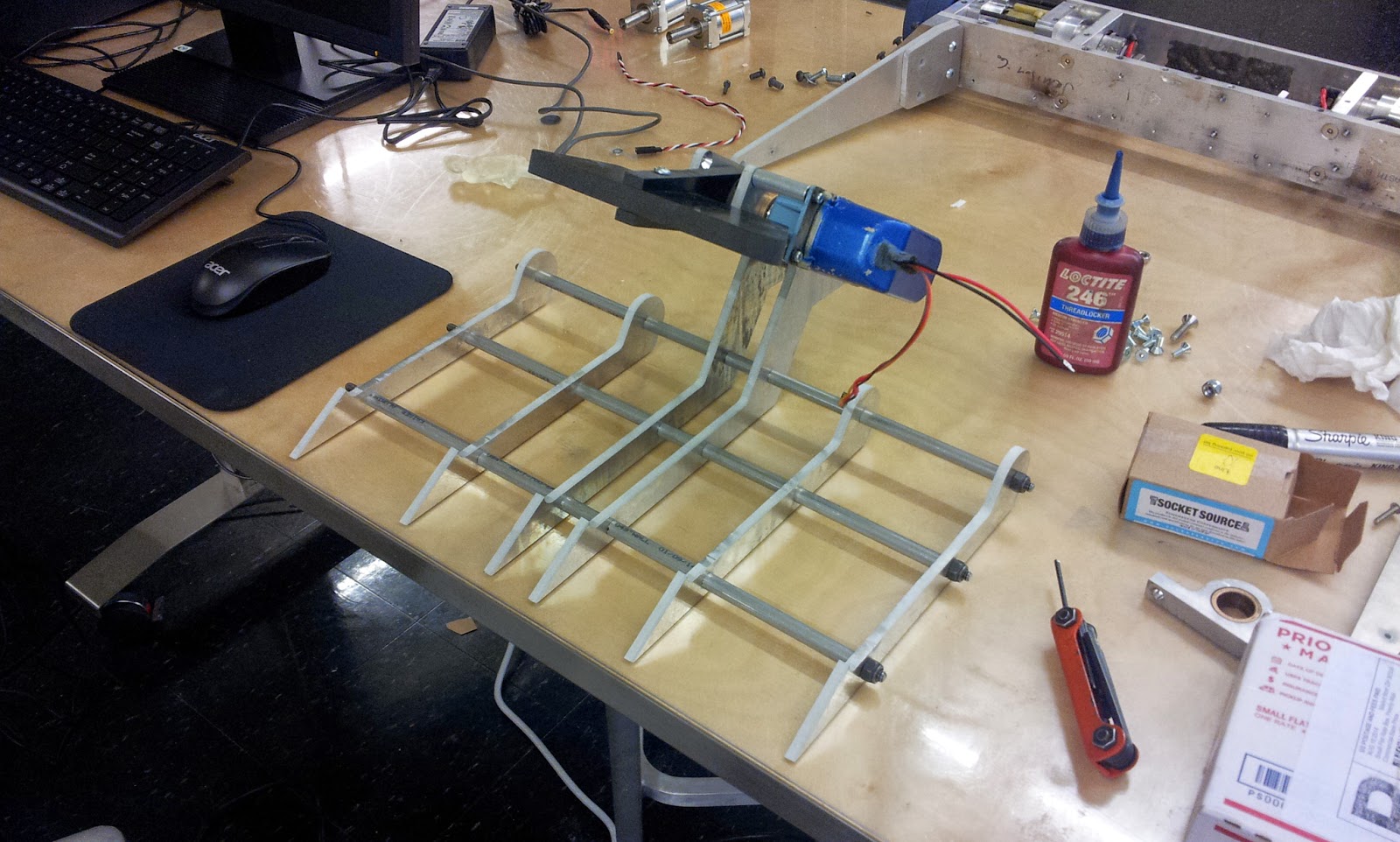 After machining a few thousand standoffs, the weapon comes together with some long tie rods. 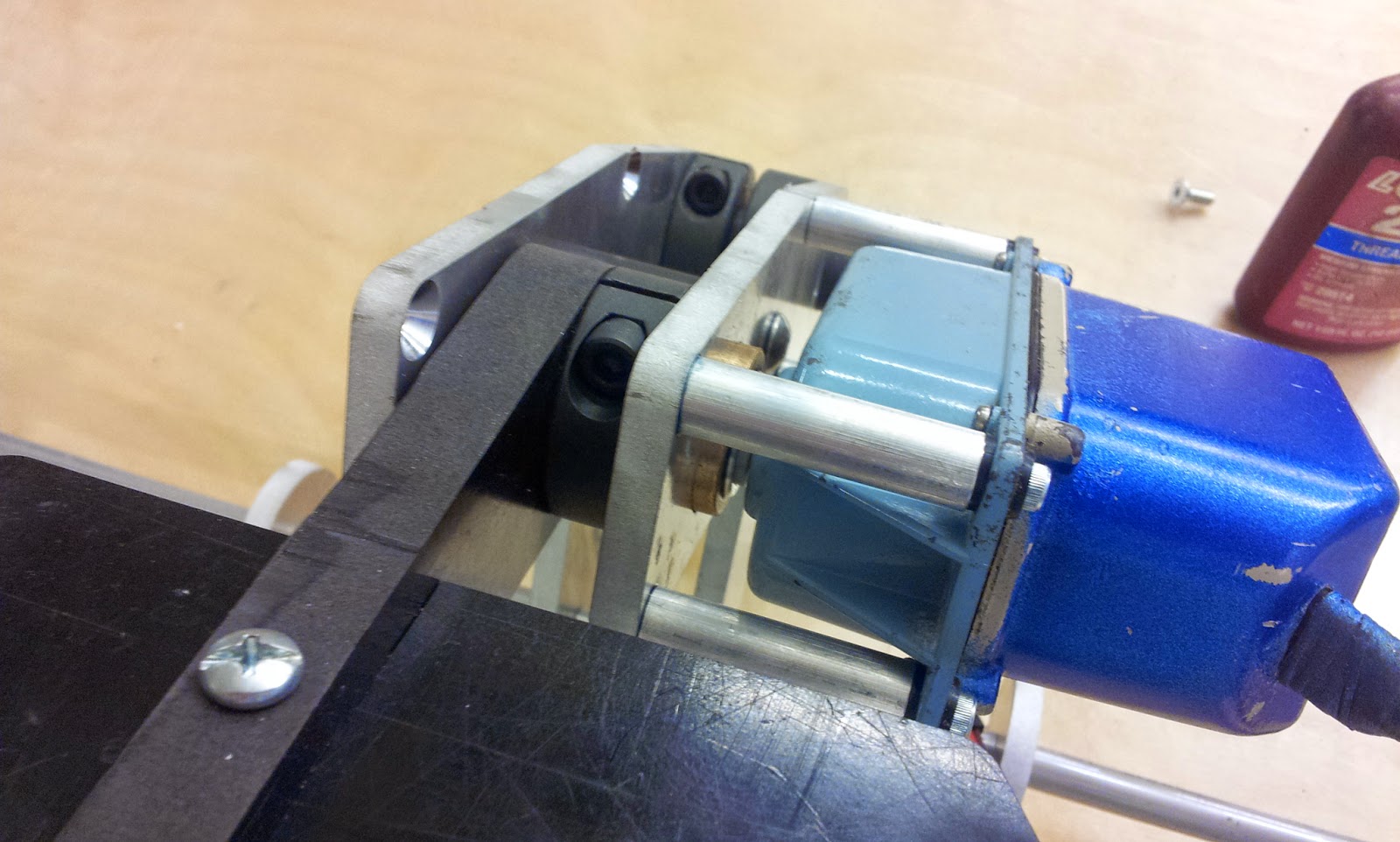 The top clamp servo is also mounted with standoffs. Now I can add the clamp clutch and clamp arm! 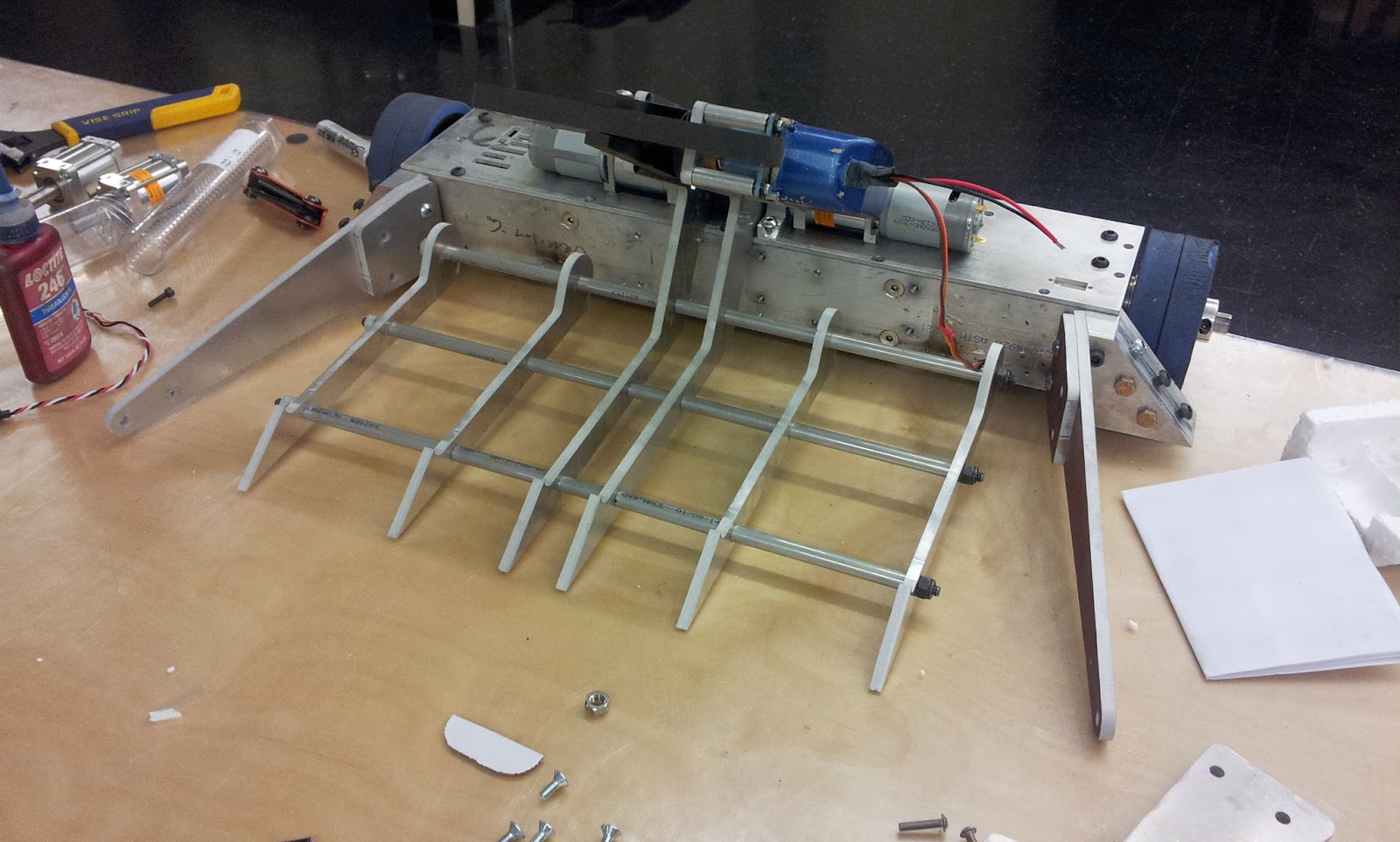 Very little would change with regards to electronics. I removed one of the 85A bot bitz escs since a single esc could power both lifter motors. To connect them together I utilized what I call the "shotgun connector". I mean a double barrel bullet connector could be a shotgun right? Id love to see someone scale this into a six-shooter or something...

The servo is beastly enough that it would need far greater current than the 500mA or so from the ESC BEC. However, with a 12V max limit, I would need a method of stepping down the main battery voltage. Luckily, Charles had experiemented with DC-DC converters for herpy nano bike. He simply used a BEC and changed the feedback resistor. This tricks the converter into supplying higher voltage but at the expense of current.

After those changes it was time for a test! Seems to pass. 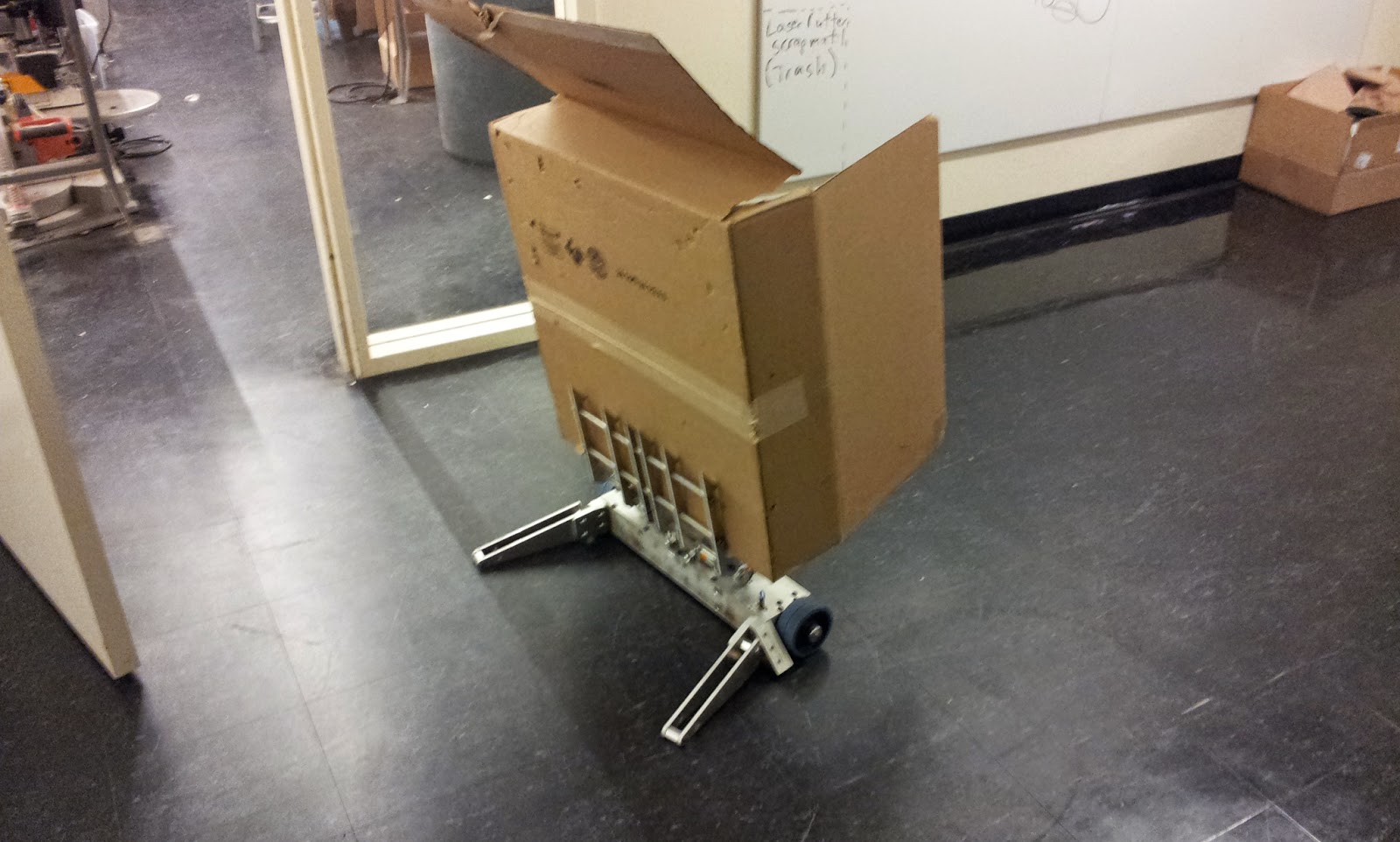 The robot wheelies very hard on accelerating which makes scooping robots or object very difficult. However should it happen the pan turns out to be incredibly quick! It is a standalone flipper! 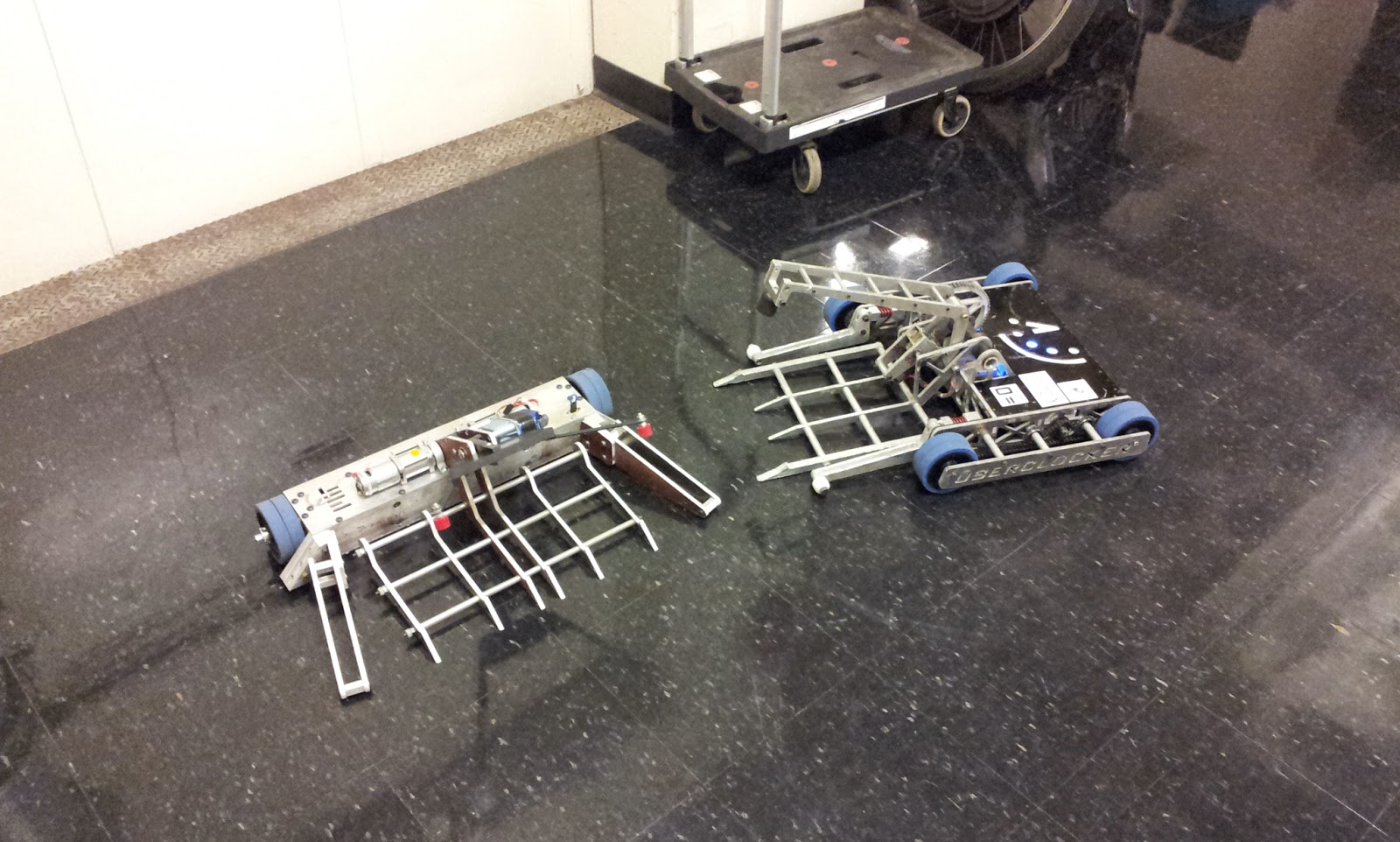 Later that evening, Charles finished up his modifications to Uberclocker so we decided to spar.

From the video, you can easily see how detrimental the wheelies are. Most times, I jump right into his grabber. However, should I keep mobile the robot is still very maneuverable and has lots of flipping potential.

Aside from the expected scuffs, the robot took no damage and performed as expected. From this point on, I decided to tidy up the wiring and take the finish shots. 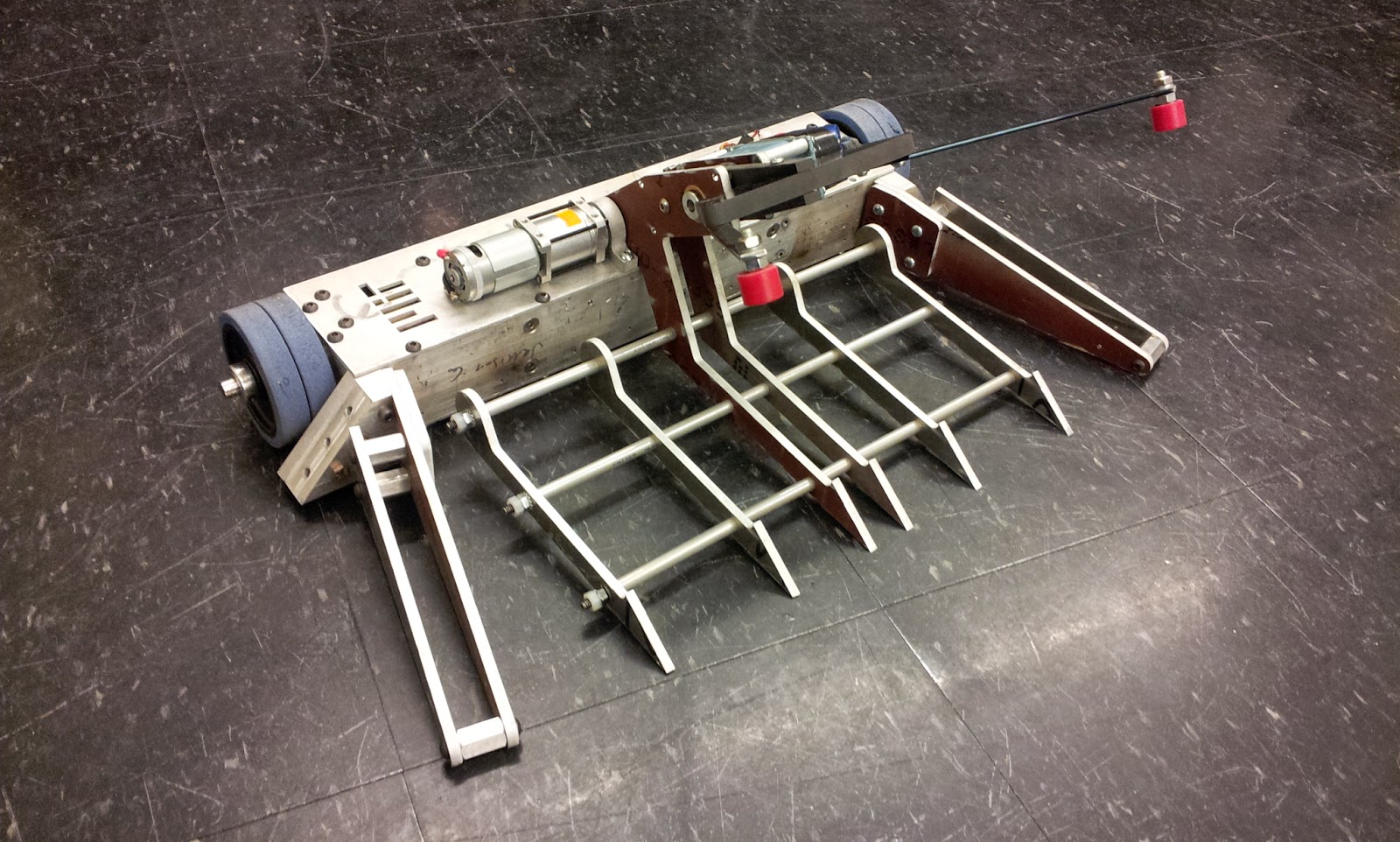 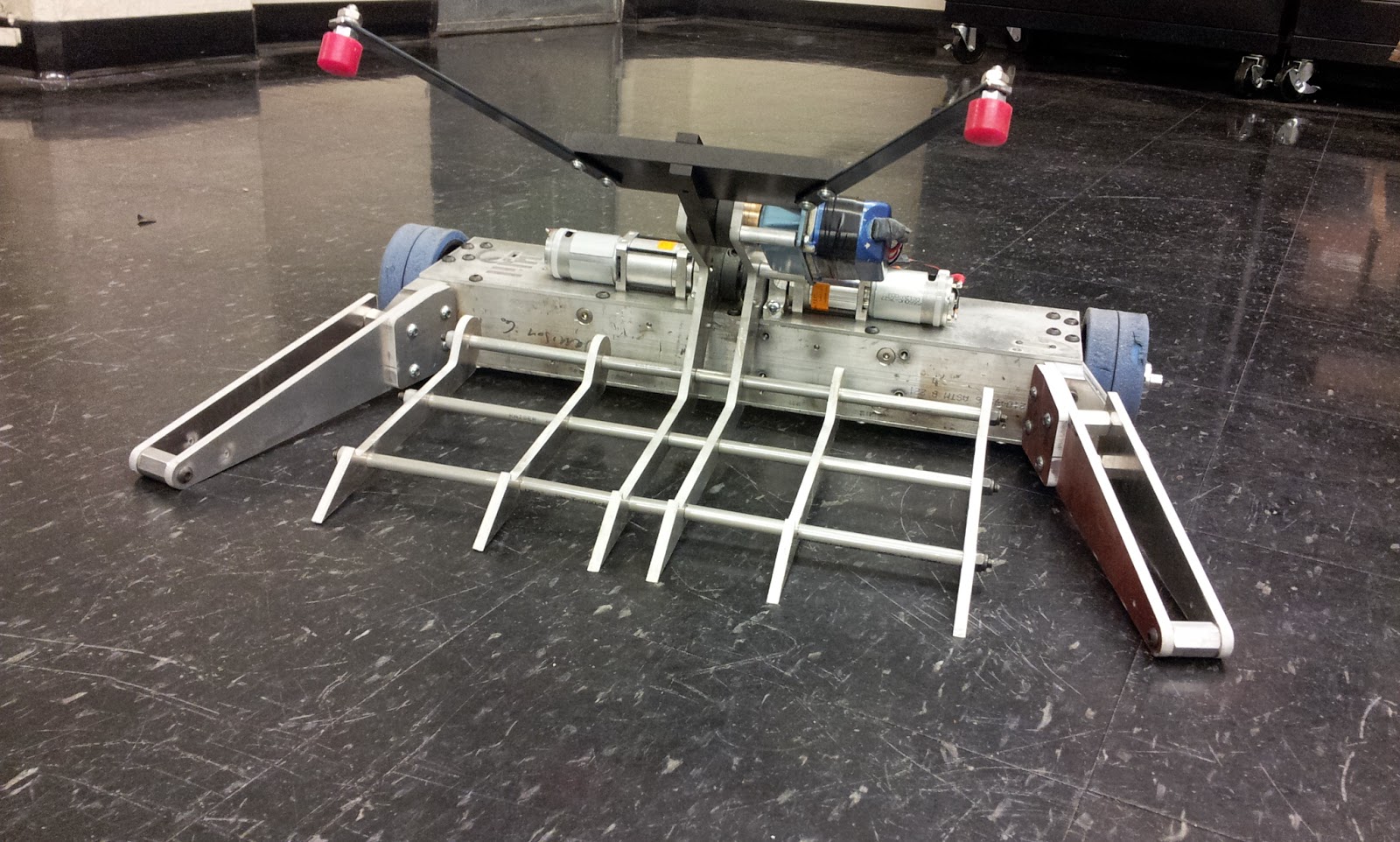 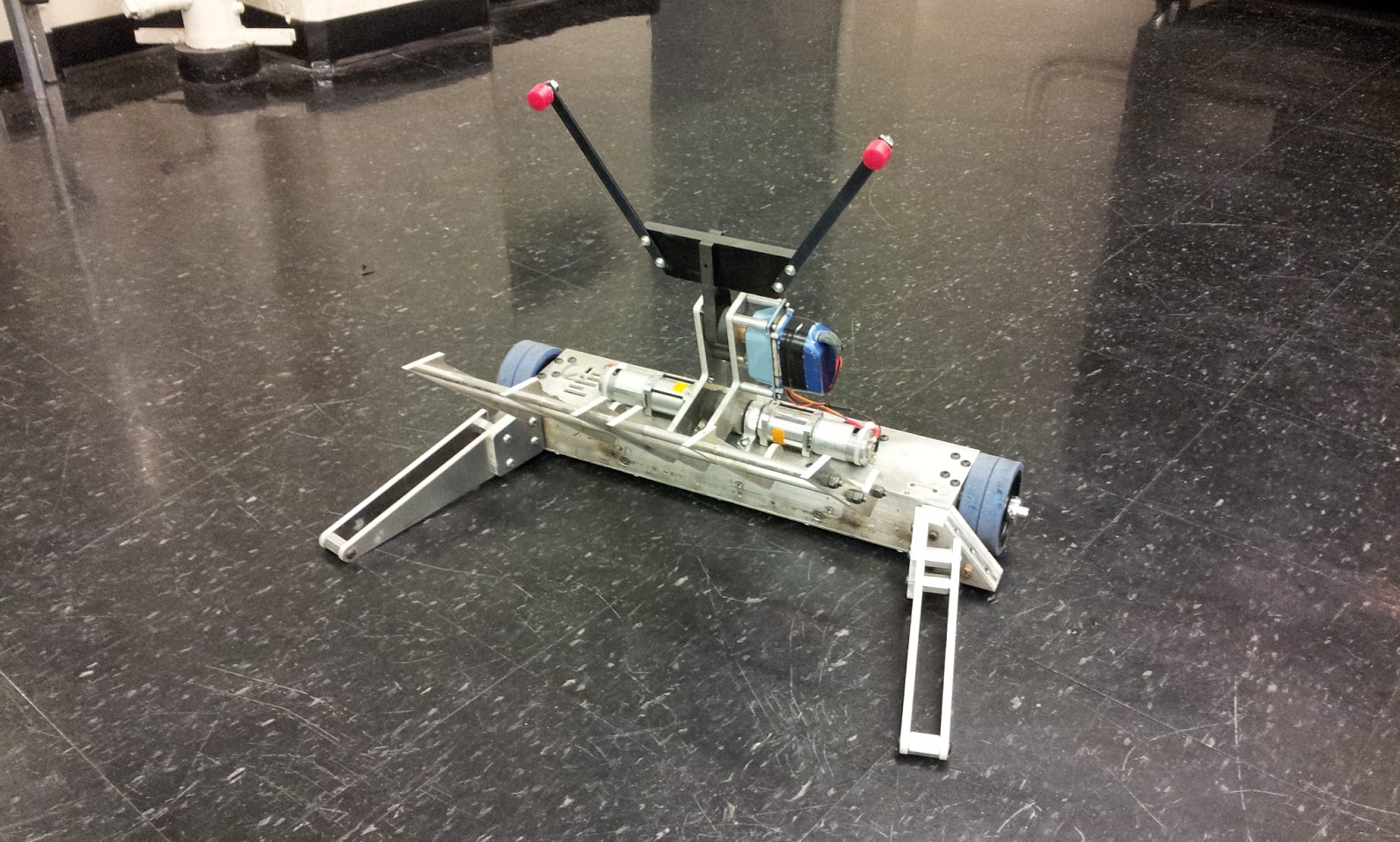 And this concludes the build report for.... what am I naming this thing again!?

Charles and I agreed the robot looked like a bug, with the red grippers being eyes or the spring steel strips being antennae. This immediately turned towards one of our favorite inside jokes, "bug love tree". This phrase was uttered by a professor during a robotics competition using broken English and has been cherished by us ever since only to rival that of "control systems potato". Change tree into robot and ship it. "Bug Love Robot", perfect.

How much love with Bug Love Robot give at Dragon Con? Read the event report to find out!
Posted by Jamison Go at 3:12 AM 1 comment: