I've been becoming increasingly interested in martial arts every day. I used to practice Northern Praying Mantis in my youth and other than athletics and personal fitness it has not been too useful until I moved to Atlanta. Things are considerably more hostile and the ability to self-defense has become the aspect that keeps me from cowering in fear of the city.

Among the other styles I've seen, I've enjoyed Wing Chun. It is a southern style, that focuses on the speed from economic movements of blocking and attacking simultaneously.

I decided to try and construct a "wooden man" to help facilitate the practice of Wing Chun.
As the name suggests, these are usually made of wooden timbres with other protrusions for the legs and arms. They can be attached to the walls, or solidly implanted into the ground. As a student who travels frequently, I need my wooden man to work, but also be collapsible and light to transport around. Digging holes and hammering on my walls are unacceptable.

So here we go: 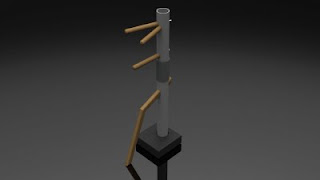 PVC body, wooden arms, and a weighted base of water similar to backyard basketball hoops. That way I can fill the base with water to add weight, and empty it between travels. The PVC construction is significantly lighter than a 9" diameter chunk of wood, but should offer enough rigidity to take impacts. Right now those are 4" PVC pipes, but I can add padding to thicken them, or use larger tube if i know they are available.

But the key features are present. The arms and legs are removable, and the base is separable into two parts to facilitate packing all the while being light.

A major determining factor will be the mating parts for the water base. I don't actually have one, so I need to first find one I can dismantle before finalizing the design.

This will be built when I return to Florida.
Posted by Jamison Go at 8:42 PM 1 comment:

I neglected updating the blog for awhile due to life, but I promise this post has some good content. First, the summary:
Last time I assembled the endcaps to find they were wobbly by not-so infinitesimal amounts. Did I re-machine them? You bet. But this time I implemented a different technique.

You might recall, the technique I have been using to machine the endcaps was to first rough cut a disk of aluminum on the waterjet and then turn the parts on the lathe using a socket cap bolt through the center. I believed the source of the issue same from wiggle room between the starting bore in the waterjet plate and the OD of the bolt (since drill bits increase in discrete amounts not necessarily tuned to bold diameters).

So this time, I decided to apply some angular principles of self-centering. I angled the bore by using a countersink bit. Furthermore, I grabbed the appropriate flat screws for the duty and a hexagonal standoff for the opposite end. It basically worked like V-groove stands for machining tubes. The round object is guaranteed to sit in the center of the groove. Works similarly for the conical shape. This method returned a much truer endcap, and validates the technique. 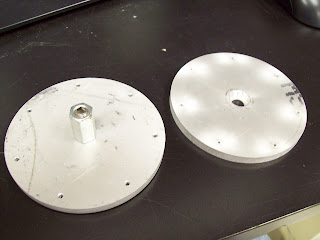 Also, automatic feeds are AMAZING. Almost a mirror finish. Never before have I turned such a smooth part. 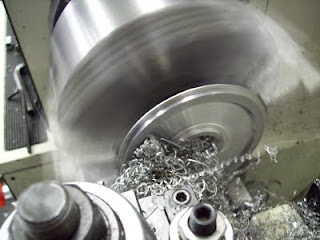 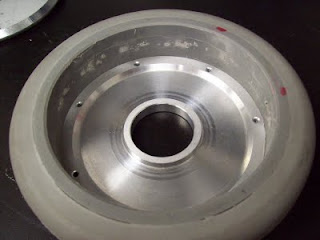 I was only able to finish one end before the term ended, so there is no way I will be able to test the wheelmotor this summer. What I can do, is wind the stator. More on that in about 12-14 weeks.

In other news, I'm finally going to fight robots again! Dreadfully Wicked Robots is hosting PA Bot Blast in the Bloomsberg Mall. Features robots from 150 grams to 6 pounds. Heavens know I don't have a 6lber, but I do have the insect fleet. 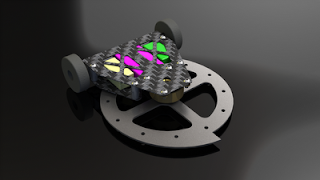 ...and more carbon-y. Seriously, lets use some of these resources I have at the Invention Studio to make some grade-A bots. P150v4 uses the old 7.4, 300mah lipoly and Jeti advance 4 esc but everything else is new. 30:1 micro sanyos, Turnigy 2204 brushless motor, HMC 3-9 single channel escs, and Spektrum AR-2 gram receiver. 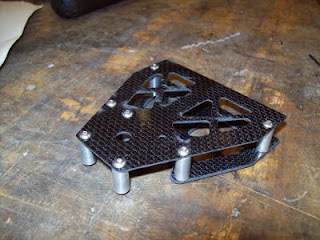 Waterjetted the carbon fiber plates. Surprisingly I didnt have to use fodder plates to prevent the delamination. I just used a large lead-in, and low-pressure settings. There was some delam happening around the frame, but nothing superduper glue could fill in. 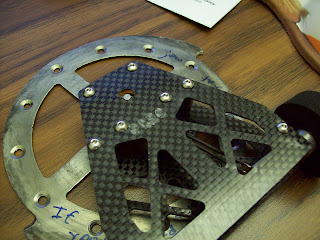 I had a moment of boredom while it was raining and decided to try engraving on Carbon Fiber. It won't cut but instead seems to melt the epoxy a bit. I guess an experience not to be repeated. 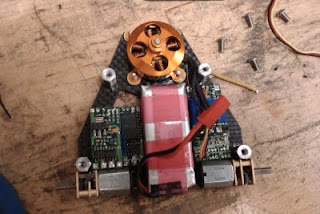 Wiring the beast is hell. I made a minor design change on the fly. Originally the robot was to use .5" standoffs to space the innards, but I opted for .375" because the motor would have required a massive hub to make up the height deficit. As a result, everything was 2x crammed in the fuselage. I had to buy the spektrum AR-whatever 2 gram receiver with the micro JST plugs to make it fit. 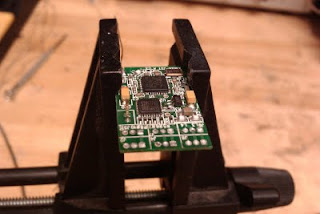 STILL I had to remove the micro JSTs and direct solder. [note to users: spektrum decided to be crafty and switched the positions of the 5v+ and gnd on this receiver. BE WARNED]

The HMC3-9's were angled (WTF) and flipped to fit. Only one superbus was used for power.

Somehow, it all fit. 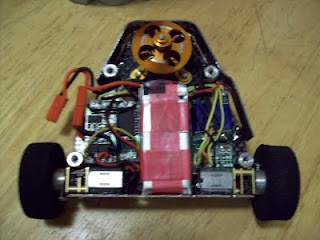 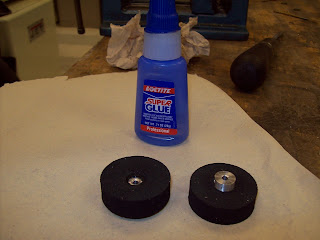 After turning down the wheels from 1.5" to 1.125", I finished the bore on some old Vrogy blades Seth Carr of Team Lab Rat graciously donated/sold cheaply. 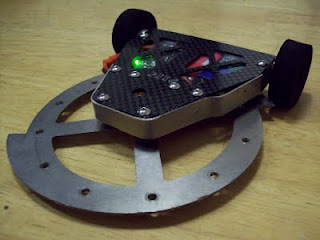 Bam. A robot. I added and bent some strips of grade-5 titanium to bring it up to weight and add protection. It looks very similar to Wazio's Pookie if anyone remembers that being built. Eitherway, it performs like a champ. Gryos like crazy, quicker than any version of P150, can rip through 1/32" steel like frozen butter.

Minor tune ups were made to the other robots as necessary. DDT required no additional servicing (as usual), Cake was lubricated and modified to include mechanical locks on the drum shaft instead of set screws (because setscrews suck), and P150 was rebuilt as noted above. I am concerned for the needle roller bearings in Cake because I was unable to remake the shaft so there is some audible play in the shaft. Could damage the rollers, so I'll bring the old drum as a back up. 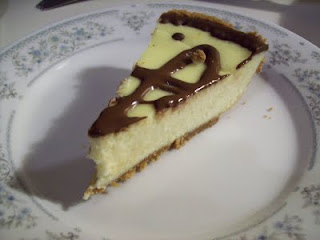