Its been about three weeks since GCRS took place. I went back to sunny Florida and made the trek by myself (in my new car!) to Bradenton to visit the Robot Marketplace Retail store for a competition they like to host every 2-3 months.

I attended with my two main robots, DDT and Cake. In short, DDT was pretty abysmal and Cake went to win the beetles 4 wins, 0 losses.

Here are some matches.

Cake came away with the most damage it has ever accumulated (which is not very much). A lot of the hits were to the the soft steel drum, which is expected since that is the business end. I didn't expect anyone to divot it, but Voodoo Magic is a pretty mean bot. All other surfaces fared very well, offering only glancing blows for the opponent. Never was I tossed backwards by a frame hit. 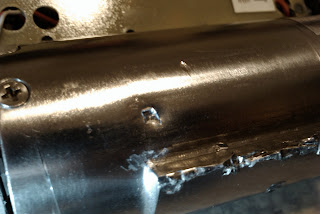 DDT on the other hand, is not a fan of this arena. The low walls were to blame for all of the losses. I remember DDT doing really well in the past, and I believe it is because of the fully enclosed arena. Gosh, I really need one of those back. I will probably run DDT for the remainder of the school year and then build another ant. He has served well, but there is much to be discovered in the robot world.

Dragon Con is this weekend. DDT will have the chance to redeem himself. Unfortunately it will be difficult because the Robot battles arena also have pushouts :/
Posted by Jamison Go at 9:14 AM 1 comment: