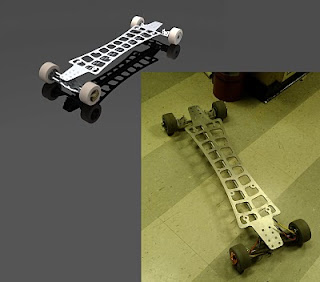 Pretty awesome eh? I might try for an exploded animation like I had done for Cake a few posts back.

In the meantime, Xo has gotten some pretty impressive electronics work done for the wireless system. I could try my hand at explaining it, but he does a much better job than I could ever do. A trial run video will be up soon.

So by popular demand, the project is renamed "HÄRDBÖRD". I second this change because I did not much like calling it Fluffy, being not fluffy but still incredibly adorable. All previous references to Fluffy former will be updated to HÄRDBÖRD. I need a better way to inserting Umlauts into text...

Had another massive build session last night at the Invention Studio. This one pretty much wrapped up the mechanical aspects of the board. Safe to say, it is drivable by method of kick.

Last build session I had the board almost drivable except for the turnigymotors which were plain can. Yeah, not going to rough up that beautiful Chinese machining for some unenjoyable joyriding. So first operation of the evening was coring out some wheels. 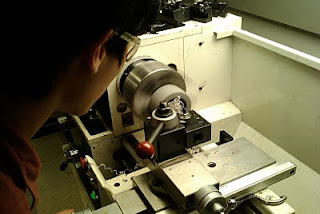 Here is the invention studio baby-lathe in the back corner of the other room. A bunch of really cool automated machines sit here, but only 4 of them belong to us (CNC not included). Still this lathe is pretty sweet, because it can do the whole threading trick. Other than the standard lathe functions (gear ratios, digital readout, etc.) it has an auto jog. Woot.

Mounting the wheel to the chuck was an interesting task because the jaws were not exactly large enough to handle the object. I had to resort to the inner set of teeth and crank really hard into the soft 30A durometer wheel tread... Sounds like a terrible idea. 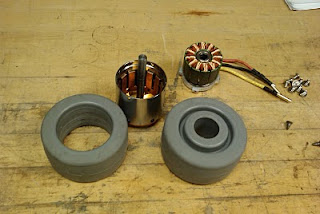 But it came out pretty awesome. Wheel, cored ring-o-wheel, motor can, and motor core all in one picture. A perfect slide-press fit too (with the exception of the screw heads)! 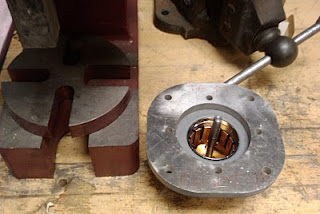 Partway through, I realized we would have to push an extra .25" deep so we could access the screw heads on the near side bearing of the motor. For this, we employed a random piece of scrap. And Arrrrrrborrrrrrrrr presssssss. 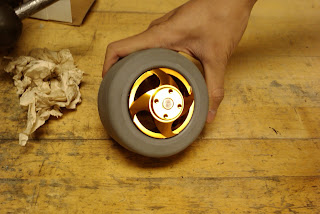 Bam, wheelmotor...and then there were two. 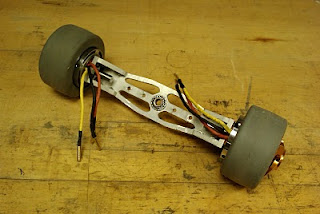 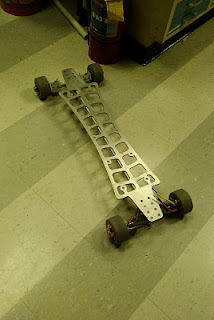 While Xo assembled his stuff, I made a few laps around the MRDC on the board. Verdict: it works but with corrections that need to be addressed.

The springs are too soft. While the truck turning geometry is fine, the springs used to give resistance to the turns are too soft which makes the board very... "responsive". It is far too easy to over turn and drive some retarded sinusoidal board path. This probably means some design correction is in store. When I say probably, I mean definitely.

A very important but final modification to this build session was the shortening of the power pack. The stock 4Ah, 6s1p lithium batteries I purchased were 39mm tall (~1.5" +4mm) which is taller than I would have liked it. The goals for this now are to fit everything underneath the 1" square 8020 piece, which might be just impossible depending on how tall the out pins on the Maxons are. Eitherway, introducing longpack. 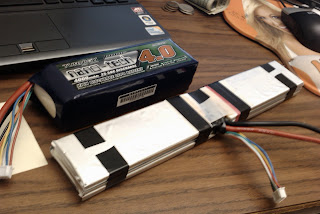 While You Were Away

We left off at the fabrication of the board (including misc parts) and the installation of T-nuts. It was essentially a frame. As it stands right now, it is still a frame, but fanciful one with moving parts!

This semester I became a ULI for senior design (somehow) which gave me access to the fancy jumbo tools that the institution has. First and foremost is the Omax Waterjet cutter, which I have grown a close relationship too over a few long nights and days. 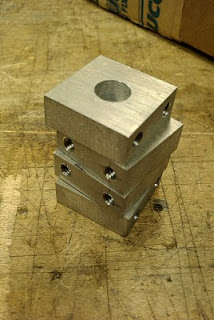 On Friday I began making some real parts (as opposed to other days where I would dick around with the scraps). First on the block were those 3/8" Al mounting pieces to hold the pivoting truck bars. This was a slight improv over the original design which included plastic parts. I dumped the plastic for the metal because the mill did not yet have tooling, so it would have been awhile before I could actually get to making them, and I wanted a test drive. So in my haste, I waterjet some 1" x 1" squares from a piece of scrap and end tapped them to replace the plastic parts.

Here they are installed: 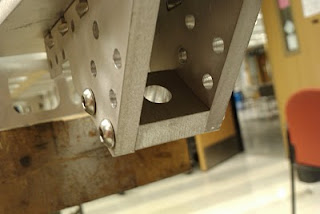 that took about "x" amount of hours and by then it was probably midnight. But it was also Friday, where frankly I don't care how late I stay up because there are no classes on Saturday (just service projects and football games).

I decided to improv once again and ditch the plastic design on the pelvic bars for \m/etal t-nut designs. 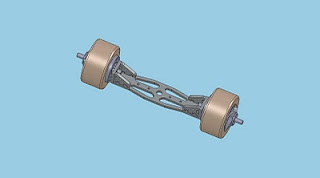 It was named "pelvic thrust" in haste (is this what 4am Jolt engineering feels like?).

I was fortunate to find another scrap sheet of mystery 1/4" Aluminum to test the idea. On the waterjet it goes. Dry runs should go quicker, seriously. I didn't like watching the head move around for 17 minutes to watch for errors.

Here's a video of the cutting action:

It looks unexciting because the parts must be submerged in water while being cut and the garnet clouds the water so you can't see into it. Still there is a quaint little monitor that you can track the machining head with. 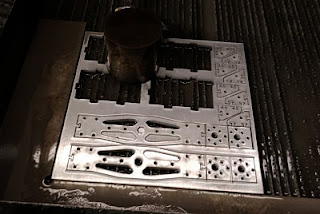 Pretty sweet eh? too bad it is messed up. Can you spot the error?

During the final minutes of the cut, a jet of water circulating through the cutting bed pushed one of the random cutouts from the piece and it hit the jetting head shifting something over. It caused the cuts to be slightly off center so the entire bottom row of parts (which ironically are the important ones) were unusable. Observe the rightmost t-nut slot for the obvious error.

I still had enough parts to assemble one leg and that is exactly what I did. 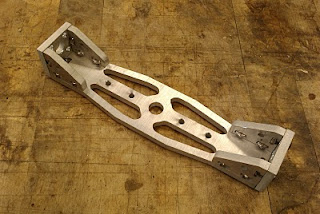 Here stands a leg fully assembled. I found out later (by empirical testing i.e. hitting it) that the mystery Al was actually 7075. THIS IS NOT SCRAP!!! Good for me :)

I finished my classes and rand back to install the motors. 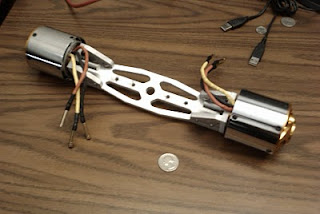 I was surprised to find that the bolt holes were perfectly placed with no rubbings of any sort. With such positive feedback, I proceeded to mount it to the board. 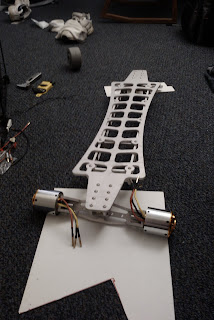 The plastic sheets allow the board to shuffle left and right without resistance by the carpet. Story short, it works! The steering mechanism works! My roommates and I all took turns trying to see who could balance themselves the longest, which proved to be extremely difficult because there were no springs installed to give leaning resistance.

You may also assume the wheels are not mounted yet. You can actually see a wheel randomly in the floor to the north of the board. Those are 4" dia, 2" wide, durometer 30A wheels from McFaster-Carr. They came in at a pricey $14 each but should give good shock absorption, traction, and small dia (for torque).

I just realized that I did not address the parts purchased for the project. The wheelmotors are built from some nicely sized Turnigy outrunners. They are about twice the size of Attrition's drum motor by length. The idea here is to produce the maximum amount of torque because I have a feeling we will fall short in that category. The motors may require a rewind because they are not only 280kv motors (which translates into about 35 mph no load) but they will probably draw too mugh current for the poor little Maxon DEC 50/5 modules that we plan on using to drive them.

Speaking for Maxons, Charles Guan has written up a very nice report on the use (and abuse) of these modules for brushless EV use.

Power comes from these 6s1p 4000mah Turnigy batteries. I was excited to find they they came with adapter plugs that matched the format of the Thunder Power plugs so I could actually balance these guys.

Wireless controls come from a Wii nunchuck and a pair of Xbee modules. I would elaborate more on the operation, but mush of that has been the duty of my experienced counterpart in the project, Xo Wang. All I know for certain is that it has a 5v analog output (necessary to drive the Maxons) and uses the nunchuck features to produce some damn awesome control (button enables for drive, with proportional control from the joysitck).

Also notable, I modified the design of the supports for the board. In my rush to putout the order earlier this year, I poorly designed the supporting frame members through the board. Although the center was rigid and safe, it did not extend to the trucks, which essentially left a high moment on some parts of the frame not designed to handle moments (evaluation done by my visual FEA). So here is the solution: 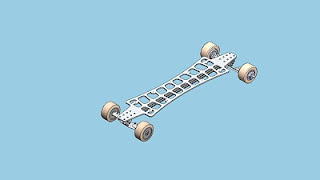 Replace all that metal with a single length of 8020 Extruded aluminum. Lighter and smaller in profile, with more mounting solutions. I found it a win/win situation except now there is a giant metal beam running though the center. Makes it harder to completely distribute the weight of parts but the radius from the center of rotation is so small it shouldn't matter much at all.