It is a well known fact that Saftey Razor may have been better than Razor Wind for one particular reason. Safety Razor's electronics were bundled and epoxy potted on the end of the motor, making for a very weatherproof and indestructible setup. While Razor Wind had better performance characteristics, it did not have nearly the same luck.

Last week Monday, we had some rather harsh thunderstorms roll over campus and I decided to ride the scooter in the wet. Story short, I noticed a little puff of smoke that was formerly the servo tester. I almost wished it was the esc, because unlike the servo tester, I have multiples of the HK escs.

Downtime means upgrade time, so let us look down the list of things I've wanted to do but never felt like opening a working device to implement.

Over the week, I've had the chance to tackle ALL OF THEM.

First, the esc needed a low profile modification in order to seal the upper deck. Simply removing the fan would have done the trick but without convective cooling I was worried about esc overtemp. So I went one step further and increased the size of my heatsink... THE ENTIRE CHASSIS.

Here we see the heatsink off the boards cooling WTF?! Traces?! 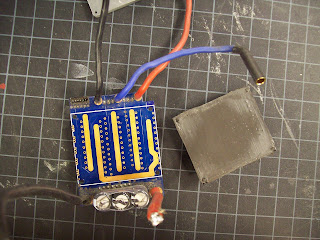 Even though the SO-8 package MOSFETs are designed to cool through the PCB, I wasn't convinced it was the best way to dissipate heat. The other side of the board had the ass-ton of FETs required to run, *shudder*, 150A. 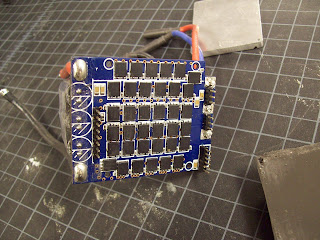 So the obvious solution in my mind (at the time) was to resolder the components such that the FETs were exposed. So here we go desoldering all the headers and caps. 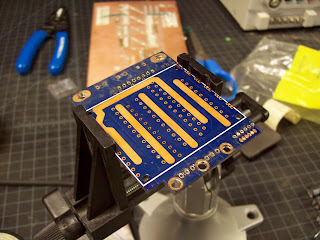 After an hour of desoldering, time to resolder. 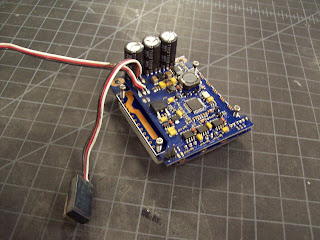 It looked pretty shnazzy after completion. Some thermal compound would be added between the FETs and the aluminum heat spreader shown below. 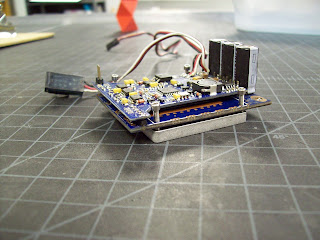 The Aluminum of course would then be mounted against the base plate and the entire thing would be clamped down with some extra 2-56 cap screws. It is awesomely tiny compared to the stock product! 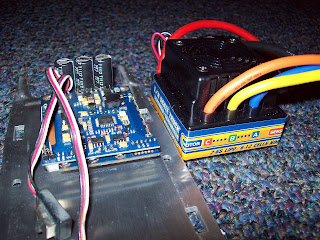 Testing indicated that everything worked as planned, but horror struck with I added the SILICON thermal paste to the FETs. I powered it up and I instantly lost three FETs on the startup tones. 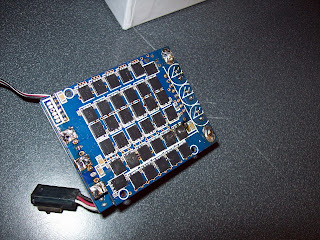 The faults indicate that there was a short, which perplexes me because I had it running the night before. The only thing different between the two setups was the addition of NON-CONDUCTIVE thermal paste. Needless to say I'll be doing this differently next time. (un)Fortunately, Digikey has the NTMFS4833N power MOSFET for min purchase of 5000. Anybody else want to split a pack?

Speaking of indicators, Turnigy engineers impress me with the concept of a 'solder fuse', which tripped internally in my 6s 5000mAh lipoly pack when the esc blew. Probably saved me another 70 dollars right there. 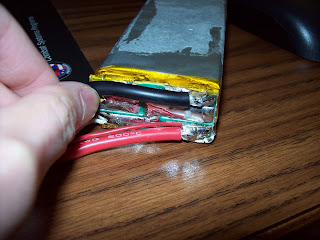 This result was frustrating but not deterring. Using my last remaining spare, I decided to go forward with a variation of the mod. This time, we should use the heat transfer traces. This was nice because I only had the invert the capacitors. 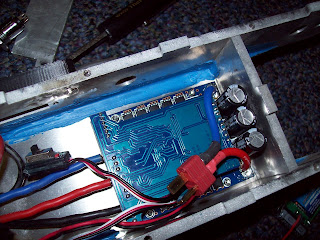 Instead of solder paste, I pulled one of the heat transfer pads off the undersides of the heatsinks and tossed it between the aluminum heat spreader and the traces. This version is working flawlessly.

OKAY, so mod #1 completed. Now we can hit up weatherproofing efforts.

I figured most of the moisture was entering though the ventilation zone on the rear end but it couldnt hurt to seal up all the cracks. While performing the esc mod, I grabbed some RTV Silicon gasket maker and filled in the corners like caulking. 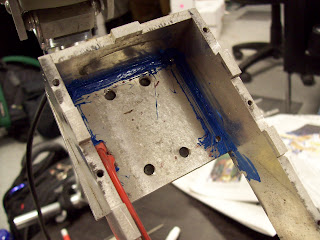 The opening over the esc was covered using a panel of 1/32" 7075 Al. I took the opportunity to make a water right exit for the esc plugs, which not only looks cool but also stabilizes the connection. 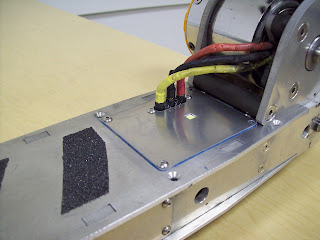 Note the blue edge around the top cover. The RTV Silicon seeped from the edges there a bit. 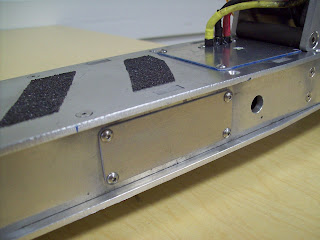 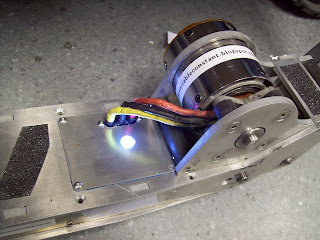 Fangoriously bright LEDs to indicate power through the scooter.

I hope I never have to test the functionality of my sealing job... Item #2 complete.

From my experiences letting other people try riding my scooter, it was clear that control was not its strong point. I attribute this to the rather shoddy rapid prototyped throttle I made last semester and the servo tester used to convert A to D.

So the throttle crazy began. I purchased maybe three different types of throttles (with spares. Say, does anyone need a throttle?) to select one thumb throttle from an ebay vendor selling 'American Chariots'.

Should you decide to purchase one, I'll save you the setup finagling and tell you the RED wire is +5V, the GREEN wire is output, and the YELLOW wire is ground. Not intuitive at all and I suppose I should be fortunate I didnt destory the thing.

I paired this new throttle up with an Arduino Nano (knockoff) to replace the servo tester. Not only was this guy smaller, but with some slick coding from Shane Colton I was granted control variables to handle throttle limiting and ramping rates. Exciting! 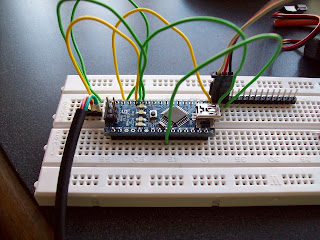 You can follow that right? Shane's Code can be found at the bottom of this Instructables page.

Items 3 and 4 completed! Finally, nothing makes things look awesomer than a bunch of reflective stickers.