MASSdestruction at the Artisan's Asylum (Oct 10)

Not too long after the Dragon Con bouts, the crew went right next door to the Artisan's Asylum in Somerville, MA to fight at the first ever MASSdestruction event. As the date came closer, more and more robots registered which helped fund the brand new arena that Rob Masek put together. It was shaping up to be a world-class event. 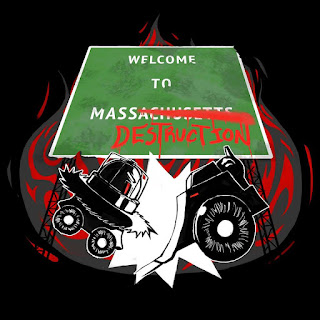 I brought DDT and Silent Spring with me; neither bot had major upgrades since Dragon Con. Silent Spring received an updated drive train which in turn required re-fabrication of a few critical components. I decided to dump the 33:1 Spark gearmotors in favor of my KW hackmotor which are the drive units I used in Dominant Mode. You may recall, they consist of the KW beetle motors (which are now discontinued) mated to a ~10:1 spur gearbox from the "1000 RPM" gearmotors. Not only is this combination lighter, but it is also faster and more powerful (1500 RPM @ 12V). This change gave Silent Spring the agility it desperately needed to be competitive and deliver the big hit. These tests on an empty Stratasys material cartridge are evidence of its new destructive power.

Saturday morning, Lucy and I hitched a ride with Will and Max Bales who brought a few robots of their own. These included the last minute Hyperderp, lovingly named Turd Ferguson, and Hypershock as seen on TV. All our bots combined, we had 10 ants and 11 beetles. To keep matches rolling consistently throughout the day, Rob proposed a modified swiss tournament structure. All robots will have ~4 matches and points will be awarded for the conditions of the match.


The top four robots in each weight class are then pitted in a semi-finals double elimination scenario to fight for 1st, 2nd, and 3rd.

In the end, DDT had 6 matches and went 4-2 for 3rd place. Silent Spring (in a weird turn of events) had 5 matches and went 4-1 for 1st place. The tournament results are hyperlinked here. Only a few matches have video from what I can tell. I will update this page periodically with embedded video as more pop up.

Overall, I am satisfied with the performance of the robots. DDT performed well (never stopped!) but was shown some glaring weaknesses to particular wedge designs. In the future, I'll need to practice driving and prepare special blades to handle these types of wedges. Silent Spring STILL suffers from random shutoffs which is incredibly infuriating but before it fails it delivers some of the most impressive blows I've ever seen in a beetle. 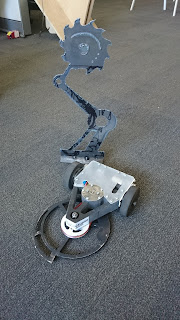 Before Franklin Institute, I'll be looking to redo the wiring and improve its overall reliability. One area that needs improvement is the blade durability; in this event I managed to bend both blades I had for Silent Spring not out of plane (say from a vertical spinner) but IN PLANE. This means its own hits are so hard it damages the disk. I would pay $$$ to see some high-speed video of the blade warping under impact! Stay tuned for 10/24 to see how these two bots shake it up at Franklin!